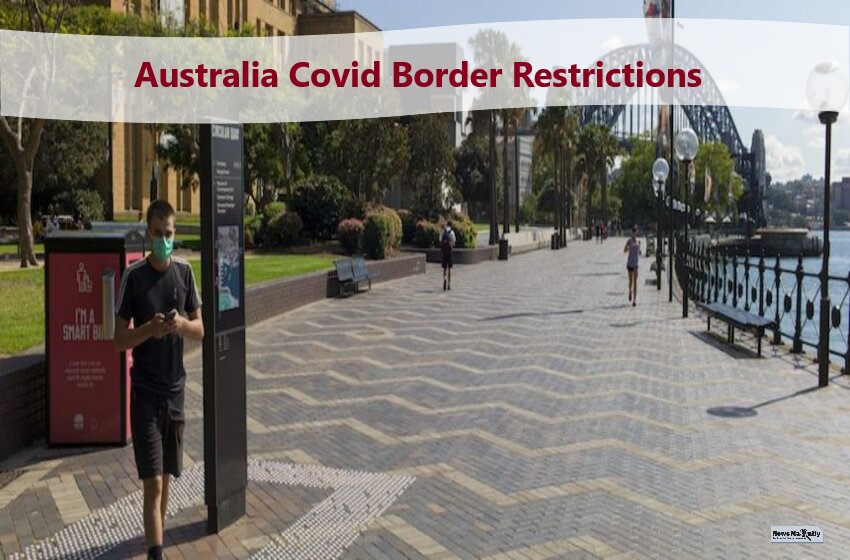 The current outbreak of Covid that revolved mainly on NSWm has again resulted in travel restrictions WA and also on various other borders. Territory and state health authorities are looking after the cases and their situation is changing on a daily basis. You may wonder when will Australia open borders for International travel? Here is a list of Australia covid border restrictions and the places where you can and can’t travel and the steps that you will have to undergo while traveling.

Many borders of Australia are presently closed and will remain so to prevent the further spread of Covid-19. Traveling to Australia is only possible if you are exempt or have been provided with an individual exemption. Let us have a look at the NT border restriction update and more.

Sydneysiders are finding it difficult to travel to New South Wales. This situation is expected to prevail till July 16, 2021. People are restricted from leaving their city except for emergency purposes which are subject to lockdown rules.

Interstate entries from the Northern Territory, Queensland, and Victorias to New South Wales that include people who have been in those states quarantined for 14 days need to fulfill an entry declaration. The travel declarations need to be finished within 24 hours, just before entering NSW, or else they will be denied entry. Anyone who has been to visit high officials must abide by the rules of testing and self isolation.

Next among the  Australia covid border restrictions. All travelers across Australia will require a permit to enter Victoria. However, every area that is under lockdown currently has been classified as a “red zone” which implies that their residents will not be allowed to enter Victoria. That means Wollongong, Greater Sydney, The Blue Mountains, and also the central coast in NSW are labeled as “red zones”. Again, despite restrictions being eased out the Brisbane area that includes the City of Brisbane, Moreton Bay, and Sunshine Coast are still under the “red zone”.

So can Queenslander travel to victoria? No, they cannot. South-east Queensland, Palm Island, Townsville, and Magnetic Island in Queensland have been termed hotspots. The south-east Queensland has areas of the local government of Noosa, Logan, Ipswich, Gold Coast, Redlands, The scenic Rim, Somerset, and the Lockyer Valley. The ACT and the other areas of NSW beyond the red zones that have been listed above are termed as “orange zones”.

Victorian residents that are returning from a red zone are permitted to enter the state, but they will have to be quarantined for a period of 14 days. And anyone who is traveling from an orange zone has to get themselves tested within 72 hours of their arrival in the state and remain home quarantined until they receive a negative result.

The border restrictions have been extended by the government of Queensland to all of Greater Sydney that includes Central Coast, Wollongong, Shellharbour, and the Blue Mountains. People who have visited these areas or have lived here are denied from entering the state, until and unless they have any special exemption.

Australia covid border restriction with Queensland and with NSW has been reinstated, which implies that no one who has been in these two states is allowed to enter WA without any exemption. This applies to every individual who has been to these states since June 11, 2021.

The only states with any travel restrictions are SA and Tasmania. But to enter these states as well, travelers will have to fill the travel declaration form and also complete the health screening on arrival.

The Australian Capital Territory has levied a Stay-at-home order for all people from Greater Sydney, the Blue Mountains, Shellharbour, the Central Coast, and Wollongong. Non ACT citizens who have been in Greater Sydney in the last 14 days will not be allowed to enter ACT without any emergency caused. And other people who are wishing to enter ACV will have to fill the declaration form just 24 hours before their arrival.

South Australia has shut its borders with Western Australia, NSW, the Northern Territory Queensland, and the ACT.

South Australian residents, anyone escaping domestic violence, and people genuinely relocating to South Australia can enter but they have to be isolated for a fortnight. People from any part of Victoria or who have visited that part within 14 days will have to get a covid test done, and remain quarantined until the test report comes as negative. All travelers that are entering SA must complete the “Cross Border Travel Registration Form” before their trip.

Tasmania is open to travelers from Western Australia’s Peel and Perth region and the Northern Territory. But the state is still closed for people from the Greater Sydney area and also 13 local government areas in Queensland that include Gold Coast, Brisbane, and Townsville. Only people having special permission from the Deputy State Controller can enter the state.

Travel to New Zealand, quarantine free has started from ACT, Tasmania, Victoria, and South Australia. But it is still closed from the NT, NSW, Queensland, and also WA.

This article is an answer to can I travel to other states and territories in Australia during the covid-19? The above is a list of all Australia covid border restrictions that you should be aware of before planning your trip.

Travelling By Train? Check Out The Latest Covid-19 Travel Guidelines