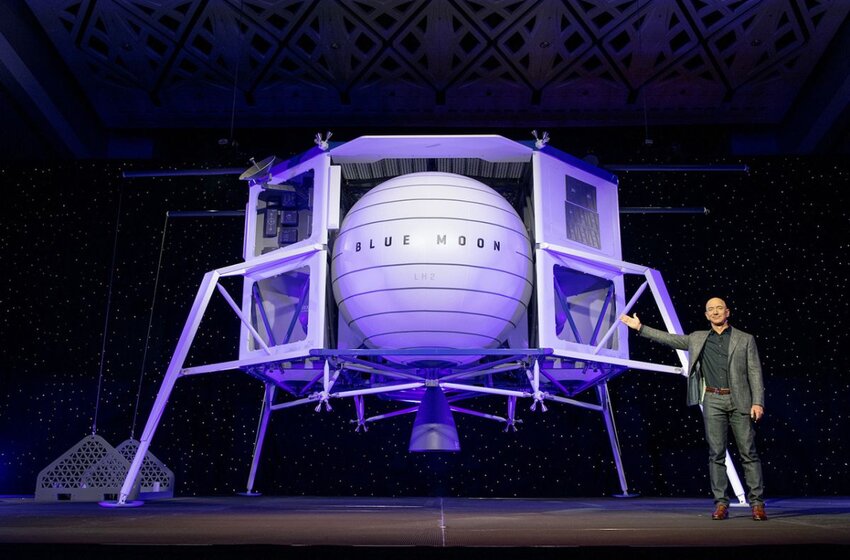 About The Blue Moon Lander

Let us have a look at the Blue Moon meaning. The Blue Moon lander is a spacecraft that is being created to land on the surface of the moon by 2024. The lander is operated and designed by Blue Origin, which is a space and rocket exploration company created by the founder of Amazon, Jeff Bezos.  The lander looks similar to the old Apollo lunar modules of NASA. However, this spacecraft is sizably larger, with “Blue Moon” printed on the side of a circular fuel tank. It also has smaller landing pads compared to other lunar landers.

The Blue Origin Moon lander is created to be customized. It has robotic tools, similar to its created like davit system, to allow it to deliver, deploy, and host varied types of payloads to the surface of the lunar surface. These payloads can have various rovers, astronauts, or scientific tools. Unlike other landers that were previously used, this one may not always carry astronauts. Hence, it is designed to be completely autonomous. Liquid hydrogen propulsion is used by the lander.

A mock-up of a commercial lunar lander was unveiled by Blue Origin in May 2019. Later in that year, NASA declared five US entities that they would be able to bid to help design and construct human landing systems for the Artemis Program of NASA. In 2020, NASA declared the three organizations which would help them, which include Blue Moon.

According to Bezos, the goal is a

"future where millions of people are living and working in space. In order to preserve Earth, our home, for our grandchildren’s grandchildren, we must go to space to tap its unlimited resources and energy."

Despite this, the goal of Blue Origin is not to occupy the Moon — even though manned stations are planned for the future. Instead, Bezos predicted a future where industry could be shifted off-planet Earth and into orbit, using O’Neill cylinders to develop orbiting factories, farms, and also data centers.

How Does The Blue Moon Lunar Lander Operate?

Now that you know exactly what this spacecraft is, let us have a look at its operations.

The lander is created to “soft land” 3.6 metric tons onto the moon’s surface. A gentle landing is a controlled landing of a spacecraft, to ignore any potential damage. A larger “stretch tank” variation of the lander will land 6.5 metric tons. The cargo deck on the roof of the lander is planned so that a variety of payloads can be levied to it. Payloads are reduced to the lunar surface with a davit system that looks like a crane. It is designed to transport up to four rovers that can carry equipment or personnel.

As the Blue Moon 2021 lander cannot use a GPS system, it will utilize a star tracking system to navigate across the previously mapped lunar surface autonomously. An optical communication situated on the side opposite the star tracker system offers the Blue Moon lander gigabit capacity from it back to Earth. Along with the laser it avails for communications, the vehicle is also furnished with a 10-megabit radio.

The lander will employ liquid hydrogen as its fuel. Blue Origin selected liquid hydrogen for two purposes, as per Bezos: high performance and its capability to be refilled with hydrogen that can be purified from frozen water at the poles of the lunar surface. That same water will generate oxygen for breathing. The lander will also utilize hydrogen fuel cells, which will be more obvious than solar power, provided that a lunar night stays about two weeks. The lander is also created to land on comparatively small inclines of 15 degrees.

The B-7 engine of Blue Origin, which has been attached with the lander, offers 10,000 pounds of thrust. When the lander is completely loaded, it will have 33,000 hits of fuel and nearly 7,000 pounds of fuel during landing, after a six-minute burn-in descent.

To increase your knowledge about the Moon and conduct experiments on its surface, machinery and people are required to be delivered to the lunar surface. One among them is presently being delivered, and that is known as the Blue Moon lander. This spacecraft is designed privately by Blue Origin.

The SpaceX Blue Lander conflict is not unknown to anyone. The conflicts extend from court cases, competing for press releases, and even Twitter feuds. Important moments include when SpaceX and Blue Origin battled for the rights to lease the LC-398 rocket launch stage, which was employed to launch the Apollo moon missions. In Blue Origin vs SpaceX, SpaceX also filed and won another case against Blue Origin that nullified the patent of Blue Origin on landing rockets on ships at sea. Blue Origin also aims at space tourism and more advancements in space. To know more about this spacecraft you can always have a look at theory official websites.

Spacecraft Enters Sun Corona For First Time In The History

Artificial Intelligence Trends: The Future Made Easy With AI