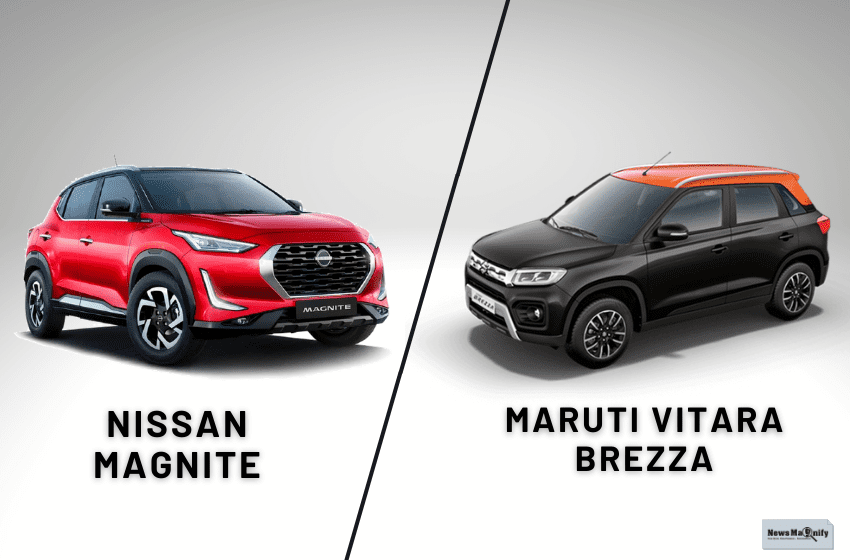 Compact SUVs provide you the best of everything in a compact price range. There is no other type of car that will give you the ground experience and handsome look both at the same time. Along with that, you get the convenience of a hatchback. It is a winning combination. But even within this tightly confined price segment, there are some cars that stand out from others. There are two SUVs in the market that are capable of comparison: Nissan Magnite and Maruti Vitara Brezza.

Let us see a comparison on Nissan Magnite vs Maruti Vitara Brezza.

When we think about the value the first name that pops in our mind is Maruti Suzuki. India’s largest carmaker kept up with reliability, quality, and yes also VFM since the Maruti 800 of 1983. The advent of Vitara Brezza in 2016 proved yet another success. It has a 1.3 diesel engine that was responsible for delivering low running cost. In such a price range it had everything one can ever ask for at that price range. It was fulfilling in its own self. So you will not be surprised to know that it was one of the best selling SUVs in India for a long time.

But Vitara Brezza is only the game changer. There came another great piece from Nissan: Nissan Magnite. It grabbed everyone’s sight with its elegant and smart looks, well equipped model, and a price that would make premium hatchbacks to take a step back. Now without any further delay let us get into the comparison.

A boxy get up of SUVs has got special preference especially in India and that is true enough in this respect when enough differentiation in terms of looks is needed to segregate hatchbacks of another similar type. Brezza accepts the formulation wholeheartedly. It is more like a square shape as we expect it to be. Adding to that is its facelift that has given a more mature look to the car distinguishing LED front and rear lighting. This comes with a colour combination of gunmetal grey and orange dual tone.

If compared on the basis of length and space, Nissan Magnite is nearly the same shape and size as that of Brezza, but its curvier roof that is a bit lower makes it look smaller at the first glance. But Nissan compensates for this by inculcating bold details. The LED lighting system is well crafted in Nissan Magnite that gives it a more elegant look. It has bulging wheel arches that work fairly well.

So with its curvy lower roof, you might think Nissan Magnite a hit in terms of interior. But that is not the case. Having said that, we are also not saying that you will find Brezza tall and hugely spacious. But you will never feel lacking space in Brezza. In the rear seat the leg, head, and shoulder space is enough. On all grounds, Brezza has enough except for one rear AC vent which Nissan Magnite ensured to put in. Both the cars have slight firm cushioning for their seats. But surprisingly the boot capacity of Nagnita is more than that of Brezza.

You will find a huge contrast in the front of the cabin. The dash design of Nissan Magnite looks very attractive in the first look itself. It gives a contemporary look to the car. It comes with Lamborghini-like Hexagonal AC vents, asymmetric AC center console, AC knobs with LCD, and so on. Just like Brezza, it does use all black themes but the black looks a bit dull but again it is livened up with the silver linings and the denim like fabric in the interior of the doors. It is interesting to see that they have managed to insert Magnite’s dash that is far from the front seat giving more leg space for the travelers. It has also incorporated a huge glove box at the top to store small items. The cabin quality is fair with some high quality plastics and fitting.

In respect to Nissan Magnite, Maruti’s cabin is functional but ordinary. You can select a lot of colors for the backlight which is a good touch. But they have incorporated MID screen colors like Ciaz and Baleno, especially this time with “mild hybrid technology.” In contrast to that Magnite’s 7.0 inch full colour instrumented screen is a good insertion in the segment. It comes up with bright immersive displays that feel miles ahead. And this is just another interesting feature that one can find in Nissan. Along with that, there is a fully equipped tech package which includes a wireless phone charging system, good ambient lighting, JBL music system, tyre pressure monitoring, and most interesting thing in this segment is a 360 degree camera array and also a wireless Apple Carplay and Android Auto.

The Maruti Suzuki Brezza does not have many such winning features like an electronic rear view mirror, auto headlamps, and wipers. But its equipment list is average. But one thing that buyers of either model will surely miss is a sunroof.

What The Users Get For Their Money

There are times when the rider may feel a few three cylinder vibes at Magnite, but it smoothes out the journey when the car starts to move. In Terms of road noise, the coarse surface Brezza feels more safe.

There can be times when Maruti gets too noisy but that is due to its gearbox. Brezza comes with a 4 speed unit which is initially smooth but is a bit slow. So to change the speed it initially may need a kick. There is a pause before shifting and let us tell you, the shift is quite firm.

The Magnite’s CVT is way smoother and at times feels like a torque converter than a Brezza’s gearbox. It is quite responsive and also eases the driver through turbocharged power bands in a progressive manner.

The Magnite will provide you that strong outcome you want from your turbocharged engine and it does well to establish its SUV character. The Brezza’s aspirated engine has a meaty torque band right from the low. It does not rely on high revs like that of Honda i-VTEC engine.

With its wide tyres and gripper, it does spread confidence around corners and for higher speed, solid feeling suspension setups helps a lot. As far as magnite is concerned it is not far from the former. Its weighty steering helps to initiate speed well. It is not the quickest steering around the world and will be requiring more twirls to initiate U turn.

Bang For Your Buck

Brezza has moved the level for a compact SUV price but this car has evolved over time. It i8s more comfortable now and also has a good inside space. It is more refined now and is clever with mild-hybrid technology. It has kept up with its brand name.

Nissan Magnite on the other is a car with Rs 1.02 lakhs lower but commendable at the same time. This car is more tech savvy and user friendly. The interior is well equipped with everything you can expect in this price range. In terms of both price and usability Nissan Magnite is a better choice though users may also opt for Suzuki Brezza.