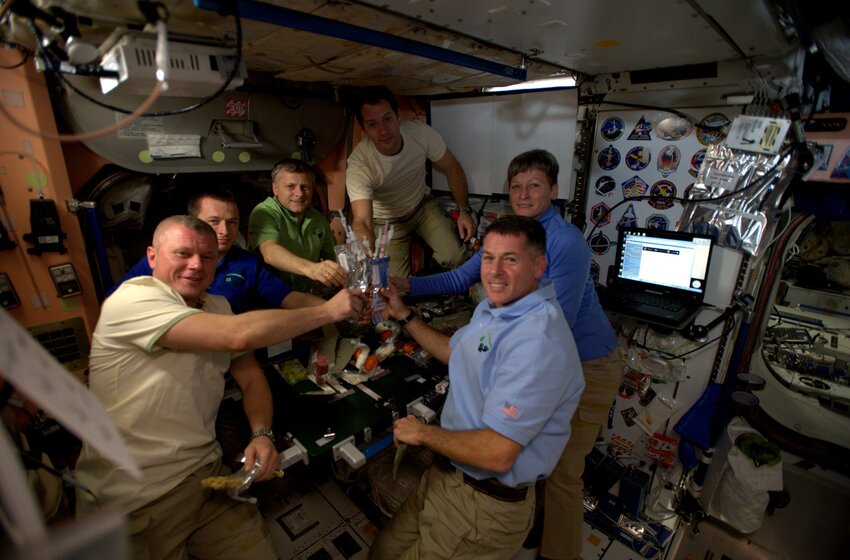 Holidays still take place in space, but they just look a bit different. Thanksgiving in space is a big festival that was celebrated by the astronauts there. In a NASA video that was shared from the International Space Station, astronaut Mark Vande said,

"I'm going to do whatever I can to show how thankful I am for my crewmates. It's wonderful having all of these folks up here. We haven't been up here together that long, but wow it sure has been wonderful already."

"We'll be working but looking forward to an awesome meal together. We'll invite our cosmonaut colleagues to join us, so it's a very international Thanksgiving."

While talking about themselves, they shared their memories with their families during this time of the year. Chari shared that he and his family typically went around the table and made each person say that they are thankful which he will be doing remotely this year.

The astronauts generally called home to talk to their families and friends on holidays that they spent away from their homes.

Chari also asserted that while the theme of Thanksgiving runs like Turkey Trot takes place on Earth, he got special colored headbands from the crew and also for himself to wear as they run off their holiday food on the treadmill of the space station.

"I just want my family to know how much I appreciate their love and support. Even though I'm going to be really far away and moving really fast, my heart is definitely with them."

Thanksgiving In Space: Holiday Away From Space

Since the days of the Apollo mission, astronauts have marked the custom of celebrating holidays in space. This started when the Apollo 8 crew popularly shared their message of Christmas Eve in a live television broadcast in 1968 by reading from the Book of Genesis in Bible in turn by turn.

The first celebration of Thanksgiving in space was evident on 22 November 1973, when Skylab 4 astronauts Edward G. Gibson, Gerald P. Carr, and William R. Pogue each had two meals at the time of dinner even though the menu was nothing special. The three continued to work on and supported a spacewalk that lasted for 6 hours and 33 minutes in the early days and missed lunch.

Along with Shrimp cocktails, cranberry sauce, and irradiated turkey, tortillas were brought by Neri Vela in space. Unlike bread that crumbles easily, tortillas were a perfect addition to the menu of space, and presently it is the favorite food of the astronauts in space. In recent times, tortillas were the ideal vehicle for space tacos that were made using the first chile peppers which were grown in space.

The first Thanksgiving in space station took place on 23 November 2000, just three weeks after the NASA astronaut trio Russian cosmonauts Yuri P. Gidzenko and William M. Shepherd and Sergei K. Krikalev arrived. The meal of the festival kicked off a celebration that was happening on the station every November. The Thanksgiving night celebration was also great.

The space station hosted the most diverse and largest celebration of Thanksgiving in space yet in 2009. A crew of six astronauts that included  Maksim V. Suraev,  Jeffrey N. Williams, Nicole P. Stott, Frank L. DeWinne, Roman Y. Romanenko, and Robert B. Thirsk, already boarded. After that, they welcomed six members of the STC 129 space shuttle crew, which then brought in Charles O. Hobaugh, Michael J. Foreman, Barry E. Wilmore, Robert L. Satcher, Leland D. Melvin, and Randolph J. Bresnik aboard. All the 12 crew members represented Russia, the United States,  Belgium, and Canada, and they together celebrated two days early since the shuttle departed from the space station on Thanksgiving day itself.

They are not in exile, they are in space. Astronauts for years now have been celebrating Thanksgiving in space, where they have their favorite meals and celebrate the day remembering their memories with their families. The astronaut Thanksgiving menu this year has roast turkey, crab bisque, candied yams, potatoes au gratin, and cherry blueberry cobbler. This has been the trend for many years now where the astronauts celebrate many occasions their way in space.

Story On The Successful Launch Of The Russian Soyuz Rocket