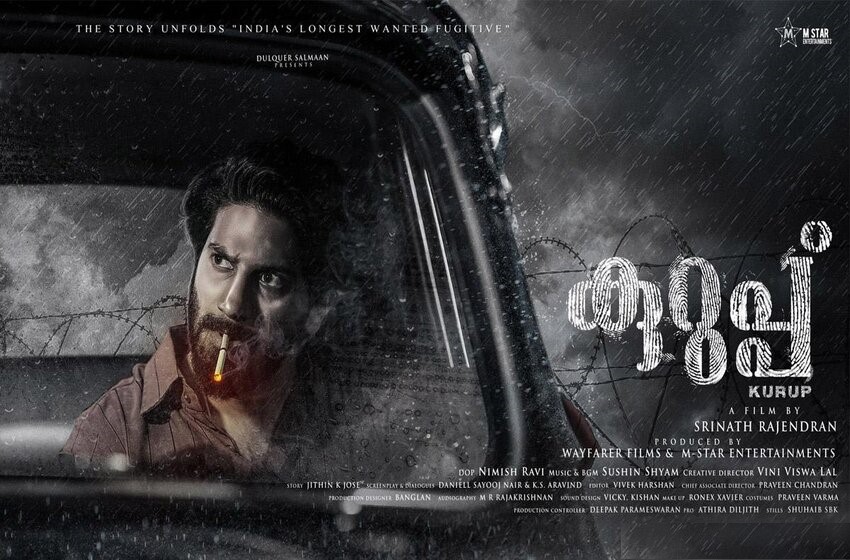 The Kurup movie is inspired by a crime and is among the longest manhunts which have unboxed the imagination of a state. Indian actor Dalquer Salmaan walks into the shoes of Sukumara Kurup who has dodged capture for nearly 4 decades, turning into an urban legend in this process. But how well have the makers been successful in implementing his life? Here is a Kurup movie review.

Kurup movie release date was scheduled for 12 November 2021. It got a theatrical release and is a box office hit. Watch the Kurup trailer now.

Kurup is a 2021 Malayali crime drama film that is directed by Srinath Rajendra. The movie casts Dalquer Salman in the lead role. This film is based on the life of Sukumara Kurup who was the most wanted criminal in Kerala. Sukumaran Kurup who was an NRI man kills a representative of a film named Chacko, who spread the fake news about his death with the help of one of his relatives (Bhaskara Pillai). The investigation is led by DYSP Krishna Das who almost manages to get hold of Kurup.

Through this Kurup movie review, let us find out if this movie is worth watching. As the movie on the longest most wanted fugitive of India hits the screen, what the audience gets to see is a fictional account of his story, wrapped with real incidents. This film begins with a long disclaimer and is set in the 60s and 70s to the 2000s.

Gopi Krishna Kurup aka Sudhakara Kurup is among the most wanted criminals of India whose desires were beyond ordinary. There was a dash of insane ambition in his eyes and the desire to achieve them in a riotous and easy way. The movie continues to show how Kurup who was a runaway army man turns into a well paid emigrant and then a fugitive.

The audience gets to see his story unfold through the eyes of many from the policemen who investigated his case to his friends in the army. Tracing the roadmap of this film, The story is difficult to illustrate, but the filmmakers keep you glued to the seat, even when the plot moves back and forth in time to make the rise, evil plans, and mysterious misdeeds of Kurup. Dalquer has given his best to suit the look of the conman, and the remaining cast was equally good.

One of the most talked aspects before the release of the film was how his teaser, trailer, and like looked to be glorifying a murderer. Though the film was screened for the surviving family, they thought that the plot was not glorifying Kurup. But there are several junctures in the film which could not deny that.

Now that you know the Kurup movie review, here is a Kurup Malayalam movie cast who have done a great job along with the lead cast Dalquer Salman.

This film delves into the dirty and messy world of Kurup with his several disguises and escapes. This can be a compulsive watch as it has a lot to offer to the audience and also provide a good cinema experience. The Kurup release date 2021 was scheduled for 12 November and it is presently running in the theaters near you. If you are wondering about the Kurup movie release date OTT, as of now there is no announcement for its release on the OTTs. You can book your tickets at BookMyShow.