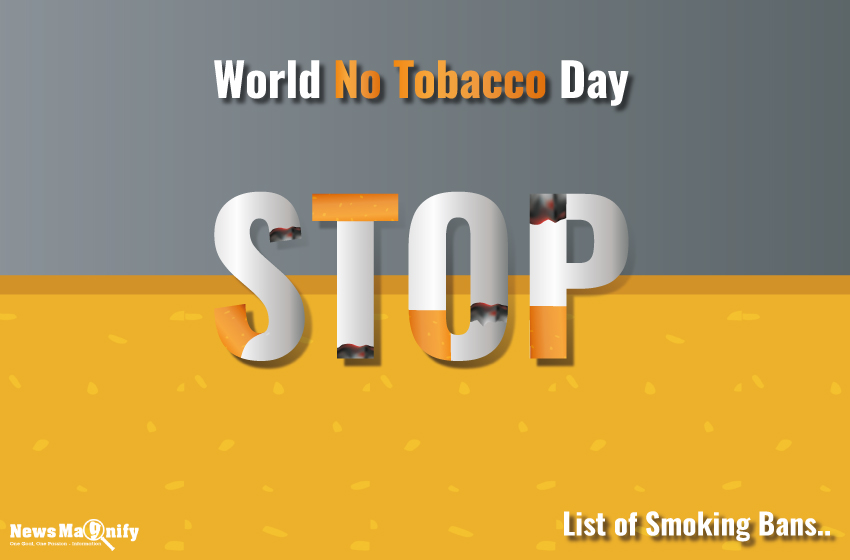 On 29 March 2004, Ireland became the very first country to ban smoking and since then many nations have followed. On this No Tobacco Day, let us take some time to look at the attempts made by several countries across the globe to stop smoking. In this article, we will have a look at the list of smoking bans across the globe and the pros and cons that it brings along with them.

Smoking is often considered the hardest vice to quit. It often takes months of rehab and a lot of determination which is the reason it is ideal to stay away from it. Smoking causes cancer. It is among the leading causes of death in the world. But many countries are looking forward to handling this menace. Countries are planning to go smoke free to wean a whole generation of nicotine.

According to WHO (World Health Organization), close to 600,000 people die every year from getting exposed to passive smoke. News Magnify takes a look at five nations in this list of smoking bans that have completely banned smoking in any public place.

In 2004, Bhutan became among the few first countries to ban tobacco sales and to outlaw smoking in all public regions. In June 2010, the nation executed one of the strictest anti-tobacco legislations across the globe by forbidding the smuggling or sale of tobacco into Bhutan. Those found guilty of the offense will have to serve a prison term of three to five years with no scenario of being granted bail. So if you are wondering which country has banned smoking completely, then it is surely Bhutan.

In 2012, Costa Rica issued one of the strictest smoking laws in the world. The legislation stops lighting up in taxis, buses, trainers, public buildings, casinos, bars, and workplaces. Smoking in Costa Rica is also banned from all enclosed public-access buildings, and no separate “smoking areas” are allowed. The nation has seen intriguing high compliant rates since the ban came into effect.

The next on the list of smoking bans in Colombia. In 2009, Colombia increased its anti-smoking laws to involve indoor workplaces and in public places. The use of phrases like “mild” and “light” was also banned on packaging and advertisements.

Uruguay became the first Latin American nation to stop smoking in public areas, which include bars, restaurants, and the workplace in March 2004. In 2008, a campaign began to promote not smoking at home and also in cars in the presence of children. Here there is a nationwide smoking ban.

Malaysia has banned smoking in various public spaces, that include airports, public toilets, hospitals, government premises, Internet cafes, and government premises. As of June 2010, those who were caught smoking in private office space with air conditioning were fined up to RM10, 000 or up to two years of imprisonment.

Other than the big nations that have been mentioned in this list of smoking bans, there are other nations as well.

The list of smoking bans that have been stated above is a policy that stops smoking in public places such as restaurants, parks, workplaces, public buildings, malls, near schools, and many more. But how far are these bans beneficial and what are the bad outcomes of these bans? With the help of this article, let us find that out.

Here are the primary advantages of smoking bans across the globe.

1. They Decrease The Risk Of Passive Smoking

Advocates for smoking bans assert that passing a law to stop smoking in public places can decrease the chance of passive smoke being inhaled by non-smokers. Passive smoke as per experts can lead to a raised risk of emphysema, respiratory issues, and cardiovascular disorders. By restricting these regions where smoking is allowed, this can be prevented.

Advocates point out that not all people smoke at their offices. If smoking is permitted, non-smokers can still inhale the passive smoke and it can be bothersome for them to even smell the smoke. On the contrary, if it is restricted, employees can be more productive. They further added that smoking can create respiratory infections and smokers are exposed to these. If employees smoke less, the probability is, that the risk of getting sick is minimized.

Advocates keep up their position about the advantages of smoking bans by stating that reports indicate decreased health costs in cities where smoking is restricted. And since health care costs take nearly 9.3% of the nation’s GDP, decreasing it can impact the economy of a nation in a positive way.

Cigarette butts are generally non-biodegradable and can clog water systems if they are thrown recklessly. By banning smoking in public areas, there will be lesser butts of cigarettes and less toxic garbage that can be kept in water systems.

While you have known all the benefits of smoking bans and how this list of smoking ban countries are being benefited in various ways, let us have a look at the cons of smoking.

1. They Take Away Freedom From Individuals

Even though smoking is harmful to all human beings, still smoking is a personal choice. And when the government imposes regulation on smoking in any country it somehow takes the freedom of individuals.

2. They can affect businesses

The tobacco sector across the globe is huge and banning smoking will decrease the consumption of cigarettes which in turn will hamper the business that is associated with it. The government of any nation derives tax from every commodity that is sold in the nation legally, and by banning tobacco they close their way to earning taxes as well.

The controversy on the list of smoking bans is not to leave the debate space soon. There will always be individuals who will advocate for banning smoking in public areas for issues on health issues and fire related issues. However, there are also those who are firmly opposing it. And even though there is a greater percentage of people who are behind banning smoking, levying these policies across the nation is not going to occur in the near future as the views of people will always be varied.

1. Are there any countries that have banned smoking?

On 29 March 2004, Ireland became the very first country to ban smoking and since then many nations have followed.

3. Is smoking banned in Australia?

In all states and territories, it is illegal to smoke in enclosed public areas that include public transport like planes, trains, and buses. office buildings. shopping malls.