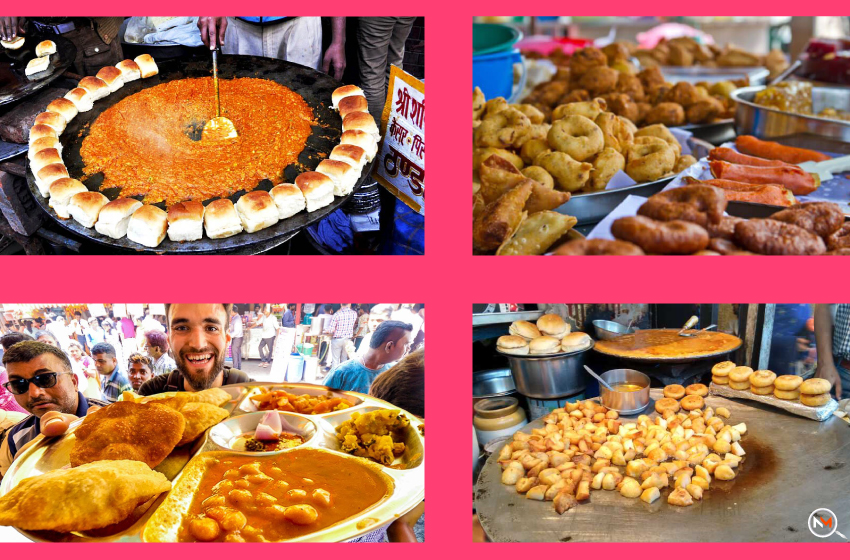 One of the things that India is famous for is the variety of street food s that is found here. The different options ranging from chaats to pavs to rolls are just incredible aren’t they? But not many know about the kind of Indian street foods that are available around the country. This is why we have curated the list of the most popular street food in India options that everyone should know about. They are some of the mouthwatering dishes that you will crave to relish at least once in your life. Also, we tried including dishes from the major states in the country.

10 Most Popular Dishes Across India

The renowned Indian street foods that one will surely want to have been mentioned here. So, we want you to choose the most popular street food in India according to your preferences and comment down below. 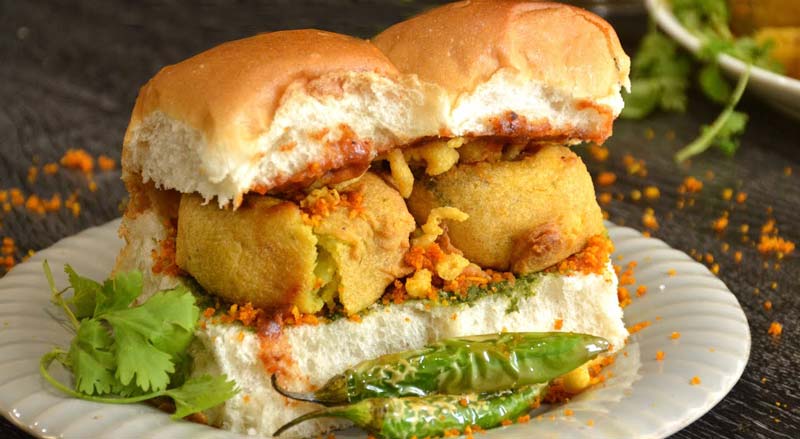 Whenever Indian street foods are talked about, how can one even forget Mumbai’s vada pav which is not only one of the most loved street foods in India but is also inexpensive? This delicacy is often referred to as a ‘desi burger’. The dish contains a vada (fried flavoured potato ball) and pav (an Indian bread). The street food vendors also add garlic and red chilli-based chutney (spice mix or sauce) to make it even more delicious. It is then served with some chillies, green chutney (made from coriander and mint leaves), and imli ki chutney (tamarind sauce). 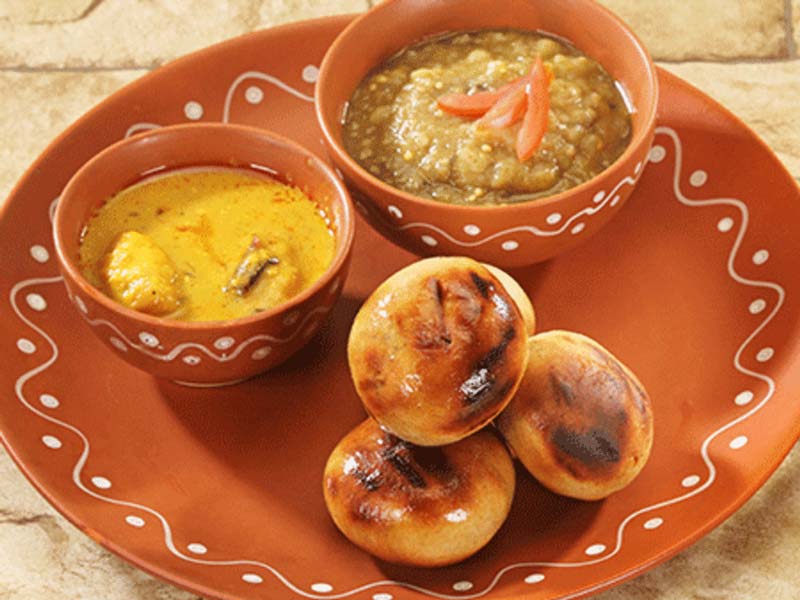 Litti Chokha is the most famous meal in North Indian states like Bihar, Uttar Pradesh, and Jharkhand. The littis prepared for this dish often resemble Rajasthan’s baati but the taste is quite different due to the distinct recipe. The dough of litti is stuffed with gram flour mixed with spices and is then grilled on a tandoor. It is then served with chokha which is made from brinjal (eggplant), potatoes, and tomatoes, which are first charred and then mashed together with onions, chillies, and spices. This is one of the Indian street foods that are quite filling for one even if not eaten in large quantities. 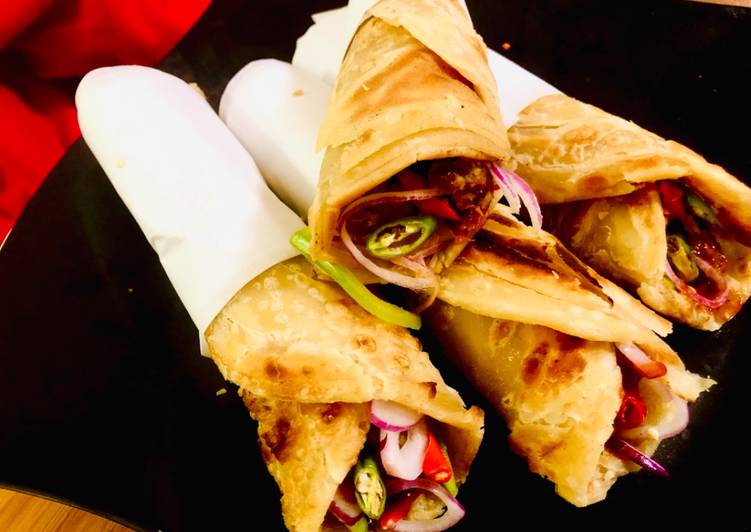 Kathi Rolls originated in Kolkata from Nizam’s restaurant. It was a result of the Britishers’ demand of not eating kebabs with their hands. This is why the aforementioned restaurant’s staff decided to stuff the meat inside crispy and flaky parathas that would be cooked on butter. This paratha was then wrapped using paper and served to British officials. The dish gained immense popularity both in and outside West Bengal. Another notable fact is that though it started as a non-veg snack, it now has vegetarian alternatives that use paneer, veggies like onions and capsicum, and even potatoes sometimes. 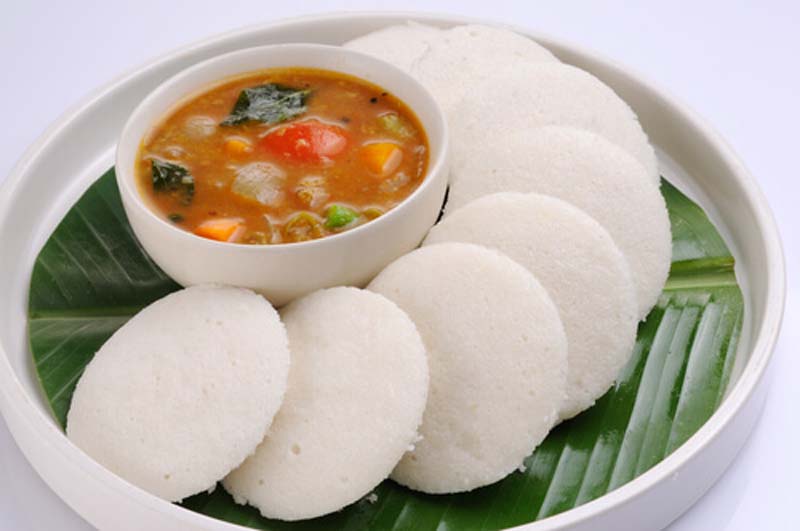 South India’s idli sambar is not just famous in the place of its origin but the entire nation. It is both appetising and healthy compared to most other Indian street foods.  It is the most popular street food in India in southern parts, served as breakfast generally. The idlis are soft steamed cakes made from rice flour that is served with hot flavoursome sambhar (prepared from lentils and spices) and coconut chutney. It might also be served with peanut chutney in the South. The dish comes at a nominal cost at various street food stalls and just one serving is enough to fill one with a medium appetite. 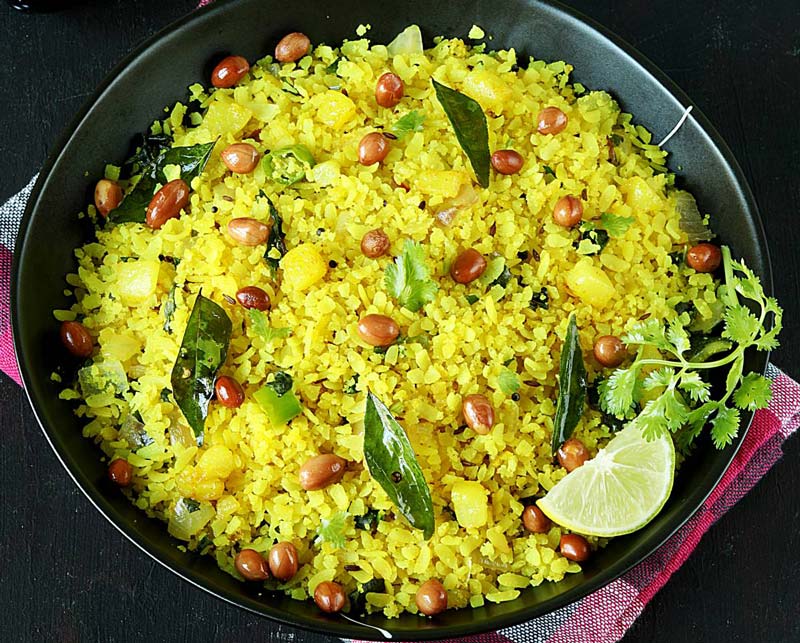 Well, some might think that poha is a common breakfast in the country, which is true, but the thing that you might know is that it is also a street food in India that Indore is known for. It is another great breakfast option for North Indians, especially, people who live in the heart of India, Indore. The dish is prepared with flattened rice (poha), onions, potatoes, peas, coriander, and groundnuts along with minimal spices. The ones who think that street foods can only be junk and unhealthy, poha defies these thoughts as it is very light and tasty at the same time. Also, it has a better nutritional level than most other Indian street foods. 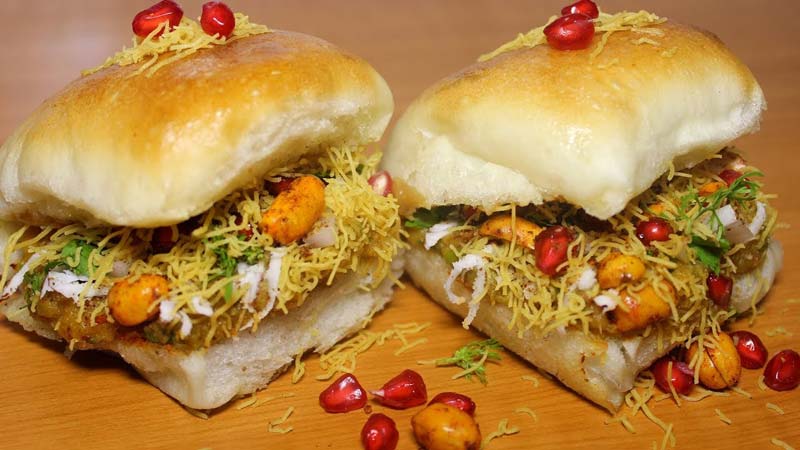 We started off the Indian street food list with a ‘desi burger’ and here we have another such variant that hails from Gujarat. Dabeli originated in Kutch and now is famous in various cities of the country including Mumbai and Pune where its distant brother, Vada Pav has been ruling people’s hearts. It is a spicy delicacy that is made by stuffing flavourful potato mix inside a burger bun along with green and imli chutneys. For a hint of tanginess, pomegranate seeds are also added to it sometimes while groundnuts are included for the crunch element. This leads to a burst of flavours in our mouths. 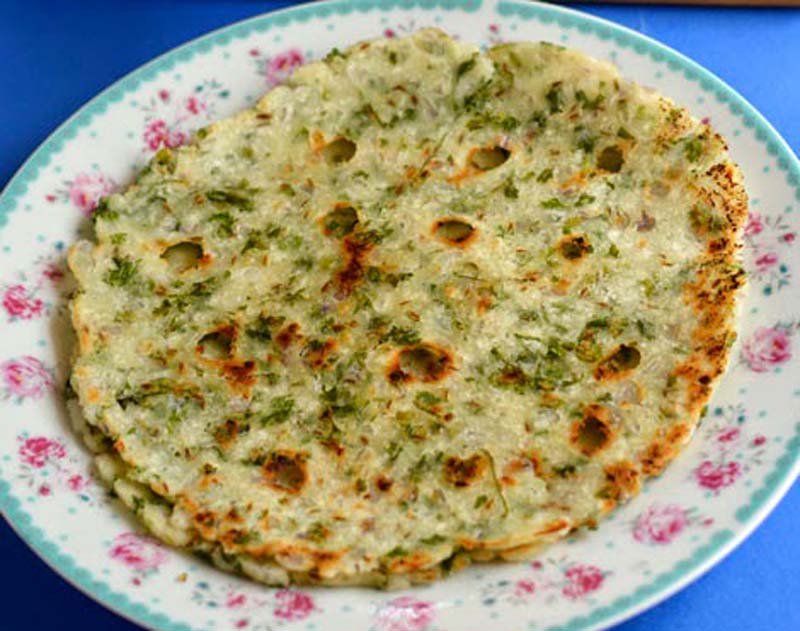 Akki Roti is one of the famous South Indian street foods that one must surely try. It is extremely delicious and is healthy too. This is a simple Indian bread that is prepared by mixing rice flour and finely chopped vegetables along with spices. It is then served with flavourful coconut chutney. Akki Roti is healthy because it does not contain refined flour and is cooked using less oil. Some street food vendors might also offer the famous South Indian gunpowder that is hot in flavour. It is so simple to make that you can even prepare it at home without any hassle. 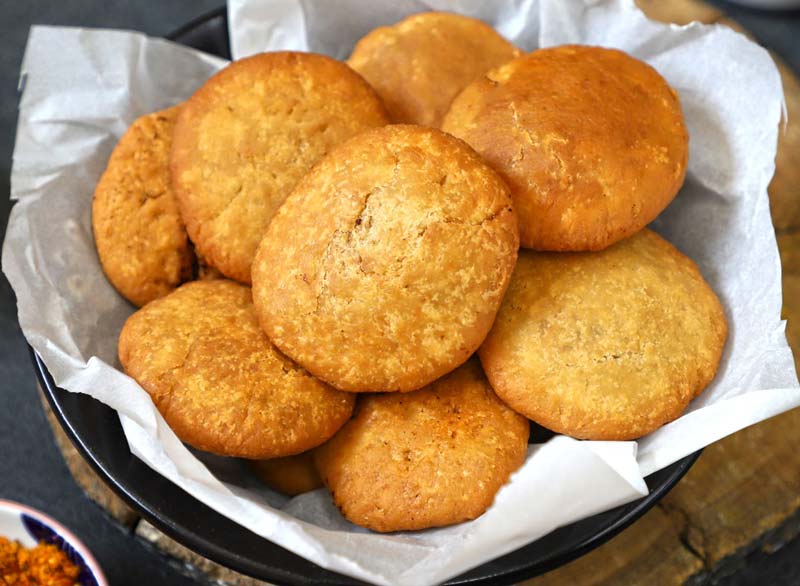 Our Indian street food list would surely not have missed out on the popular Kachoris from Jaipur. The Pink City’s street food vendors and stalls sell some of the amazing Kachoris that too with distinct fillings, which are delicious. The most renowned ones have to be Pyaaz (onions) and Daal (lentils) ki Kachori. The stuffings included are made by incorporating a host of spices and cooking the mixture well while the dough for the Kachori is prepared so they turn out crispy and flaky. The addition of ghee (clarified butter) just elevates the flavour massively. The chutneys along with them have their own essence and complete the dish. 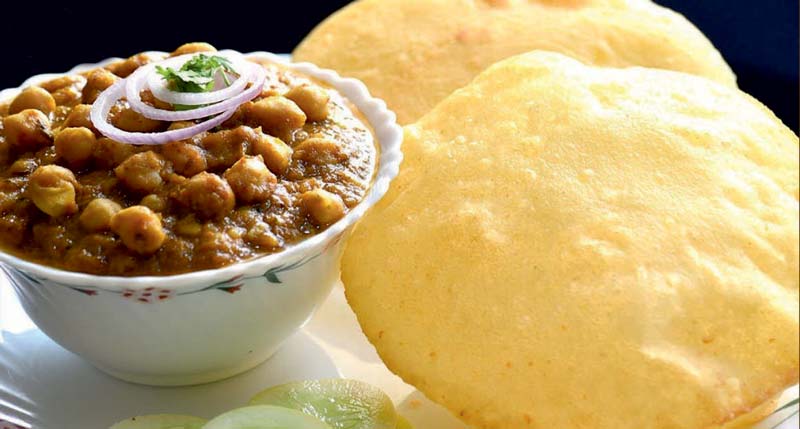 Indians would never say no to Chhole Bhature. It is one of the Indian street foods that are unhealthy but obviously having it once in a while would not be a problem. The snack contains a curry made of boiled chickpeas that is rich in taste and predominantly contains popular Indian spices. It is served with fried Indian bread that is huge (bhature). The crispy bread and thick hot chickpea curry make the perfect combo ever. Relishing this taste would be heavenly for anyone therefore if you have not tried them then do have it at the earliest. 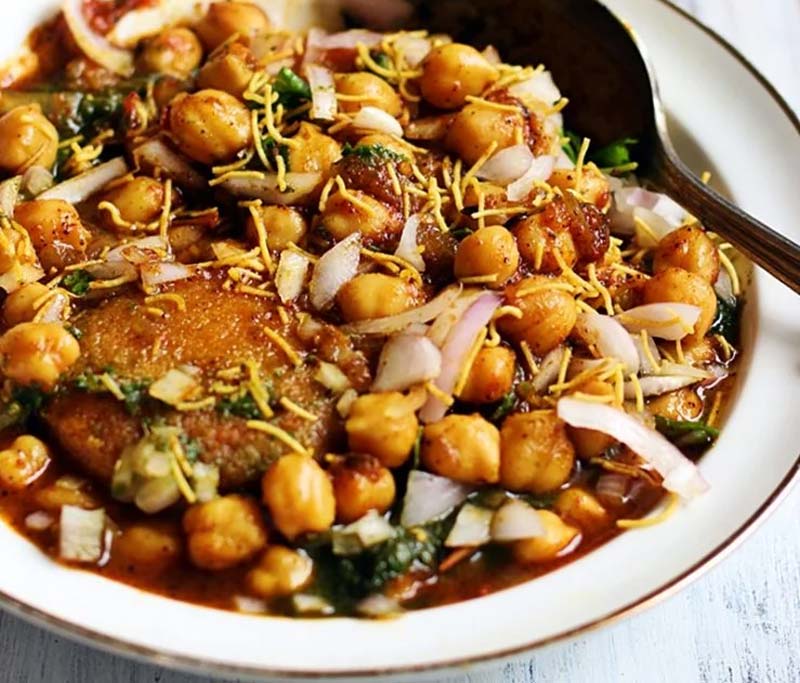 Lucknow is known for its Tikki Chhole chaat which again contains chickpeas that are tossed in ground spices. Moreover, the Tikkis made for this dish are prepared using a flavourful potato mix. These tikkis are crisp and chickpea curry poured over makes them a little soft. The crunchy and soft texture together is bliss for our taste buds. Further, fresh coriander, imli chutney, and chaat masala enhance the experience largely. This Indian Street Food chaat is a must-try!

The list of Indian street foods has ended but these amazing flavours are never going to cease for sure. So, have you found the most popular street food in India? If yes, do comment about it below. Also, try the food items that we mentioned in our article. Obviously, it is not possible for you to travel miles to try these so we would insist you to have the locally available variants as they must be worth trying as well. From our side, we would recommend you try tikki chhole (Indian Street Food chaat from Lucknow), vada pav and dabeli (desi burgers), and akki roti (healthy Bangalore delicacy) for sure as their flavours are totally unmatchable.

Litti Chokha Recipe: Relish One Of The Best Bihari Cuisine