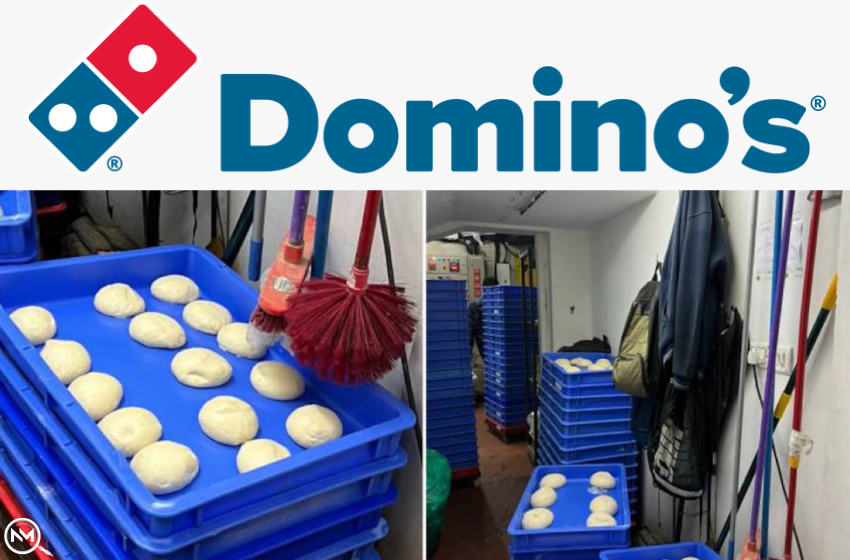 Domino’s, the popular restaurant chain, has made a comment regarding the viral pizza dough pictures. If you have been searching for Domino’s news today, you are at the right place as all the recent developments in the pizza giant have been mentioned here. Let’s first have clarity of the back story and then move forward into the matter.

So what happened is that a customer from Bengaluru managed to get some inside pictures of the restaurant’s kitchen in one of the Domino’s branches in the city and shared them on Twitter. In the picture we could see that the Domino’s pizza doughs prepared were kept in trays just beside toilet brushes and hand mops. This was a highly unhygienic practice that was criticised by people around the nation. In addition, Domino’s delivery service received a similar response.

We adhere to stringent world-class protocols for ensuring the highest standards of hygiene and food safety. We have zero tolerance for violations of these operating standards. The incident brought to our notice will be thoroughly investigated and basis the findings, (1/2)

To answer this, Domino’s food safety commitment was highlighted as the company gave a befitting reply and said:

“We adhere to stringent world-class protocols for ensuring the highest standards of hygiene and food safety. We have zero tolerance for violations of these operating standards. The incident brought to our notice will be thoroughly investigated and based on the findings, appropriate measures will be rolled out. Rest assured we remain committed to doing everything necessary towards ensuring the safety and well-being of our customers.”

However, the statement further received backlash from people as they questioned that if they “adhere to stringent” regulations, how do such Domino’s branches fail to comply with these rules? Some of them mentioned that the outlets are too small and everything was just clustered in one place. Moreover, they consider Domino’s food safety standards to be a hoax. The ones who used to love the pizza chain’s menu and food were disappointed at such an instance. People even tweeted that they “hate being fan of” Domino’s pizza.

The Domino’s news today showcases that the pizza chain’s efforts to regain customer satisfaction have failed miserably. Also, people said that they do not trust Domino’s delivery service now as if they managed to provide such unhygienic food in front of the customers, there is no limit to what atrocities can be faced by those who ordered at home. In contrast, one of the trending searches recently is “www.dominos.com order online,” so do you think that the company’s revenue from India will be affected due to this?