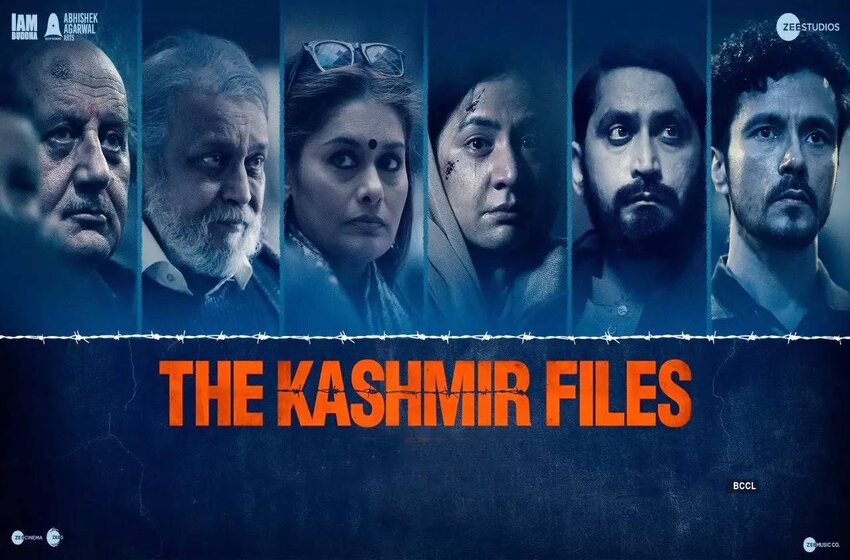 The Kashmir tragedy has deep roots. Over the time span of endless cycles of violence, an ocean of separatism, the entry of terror stuff that was funded by Pakistan, and the burning discontent amongst the people of Kashmir. The latest release by Vivek Agnihotri aims to portray the suffering of a sector of Kashmiri. Here is The Kashmir Files review.

The Kashmir Files released on 11 March 2022 and it received a theatrical release. You can watch the movie at any of your nearby theaters.

The Kashmir Files Review: The Plot

Before we get into The Kashmir Files review, let us have a look at the plot of the movie. Krishna Pandit played by Darshan Kumar is a young man who is working for the post of president of a university that is evidently inspired by JNU in its elections. Professor Radhika Menon is his mentor, played by Pallavi Joshi. He is an ideal candidate to burst the Narrative of the present ruling establishment since he is a Kashmiri Pandit.

Krishna’s grandfather, Pushkar Nath Pandit played by Anupam Kher, who is a displaced Kashmiri Pandit who was suffering from dementia, and he dies. He travels to Kashmir to fulfill his ultimate desire and sprinkle his ashes at their ancestral house. When he arrives in Kashmir, he is greeted by five individuals who have been waiting for him. Brahma Dutt (Mithun Chakraborty), a former Indian Administrative Service officer, and also his wife Laxmi Dutt (Mrinal Kulkarni). Dr. Mahesh Kumar (Prakash Belawadi), is a doctor presently residing in the United States. A retired officer, DGP Hari Narain (Puneet Issar). Vishnu Ram (Atul Srivastava), a journalist. All of them in their 70s, old, tired and bitter.

All of these persons knew the grandfather of Krishna and have knowledge of his past. He did not know that his father, mother, and elder brother were slaughtered by militants in Kashmir in the most heinous way possible. He has been brainwashed by Radhika Menon to the point where he cannot accept these facts, but he gradually comes around when he finds out the truth about his family. He is a completely different person in the end.

When he returns to his institution, he narrates a speech in which he completely, utterly, and publicly destroys Radhika Menon. His articulate speech leaves the listeners awestruck and also a little embarrassed. The film ends with the grievous images of his mother and sibling being mercilessly murdered by militants in front of his grandfather in the year 2003 Nandimarg Massacre in Pulwama district.

The Kashmir Files Review: Not So Multi-Layer Narrative

Now that you know the complete plot of the movie, it is time for The Kashmir Files review. But before you start with the review, have a look at THe Kashmir Files trailer.

Rendered refugees in their own nation, dependent on testimonials of the survivors, the movie makes a strong argument that this was not just an exodus, but a barbaric genocide that prevails to be brushed under the carpet for political agendas. Living in exile for nearly 30 years, their shops and homes encroached by the locals, the Kashmiri Pandits (KP) prevails to hope for justice and most crucially, to be acknowledged. It is strange that not many films have broached this incident despite its grueling impact on displaced families.

Be it any ideology, suffering, or faith voices being distorted seems to be a common nightmare. Kashmir, which is a lost paradise has been grappling with a humanitarian crisis, separatist movements, cross border terrorism, and the fight for self-determination. Once prosperous and multi-cultured, now a disputed territory that fights to stabilize itself amidst the constant tension, its wounds run deep and The Kashmir Files rips off the band-aid. In a time period of little less than 3 hours, we try to see the truth. But as they say, every truth has two faces.

Vivek Agnihotri’s explosive and fairly graphic film revisits the exodus and also its aftermath. Based on all the documented reports, it portrays the brutalities encountered by KP’s because of their religion. Be it telecom engineer BK Ganjoo’s murder in a rice barrel, the Nadimarg massacre where 24 Kashmiri Pandits were killed by militants dressed in combat uniforms or defamatory slogans. The film restructures these real life incidents and we see them through the eyes of an aging nationalist, Pushkar Nath Pandit (Anupam Kher), his four best friends who have seen everything, and his on-the-fence grandson, Krishna (Darshan Kumaar). Oblivious to his past, Krishna’s quest for truth creates the story.

The heart-aching performance of Anupam Kher leaves a lump in your throat. As a man longing for his lost home, Kher is outstanding. Pallavi Joshi is equally amazing. Offering her acting prowess, you wish her character was more layered. Mithun Chakraborty and Chinmay Mandlekar are competent in their respective roles.

After The Kashmir Files review, let us have a look at the complete cast.

The tragedy of Kashmir is very old now and the controversy related to the Kashmiri Pandits has been nothing but political agendas for several governments who have come to power. The history and torture of the Kashmiri pandits are not unknown to the Indians or to the whole world. This film repeats history with some distorted facts, making the Muslims and the then government primary villains. But if history is read properly, the incident is way more than that. This film has received great appreciation from a section of the people as it has shown the sufferings of a religion and their destiny.

But the matter of fact is cinema is considered as the biggest mass media and being a part of that, it should have shown the solution instead of repeating the issue and suffering. Every government has come and made big promises on the Kashmiri pandit issues, but none have done anything for this issue. We admit the fact that the film tried to show the sufferings of the Kashmiri pandits and bring their problems to the limelight, but along with that, it could have also shown what the government that is presently in power could have done. As per statistics, presently, 800 Kashmiri pandit families are still residing in Kashmir, where 500 families are still unemployed, and the government has failed to offer them any solution.

After this The Kashmir Files review, we would conclude that the film was raw in its portrayal and the acting of all the actors are fantastic, but this incident had many layers, where this film kept a few layers undiscovered. This turned out to be a politically inclined film, and so has drawn several controversies across the globe.

Jhund Movie Review: An Outstanding Sports Drama Of The Have-Nots