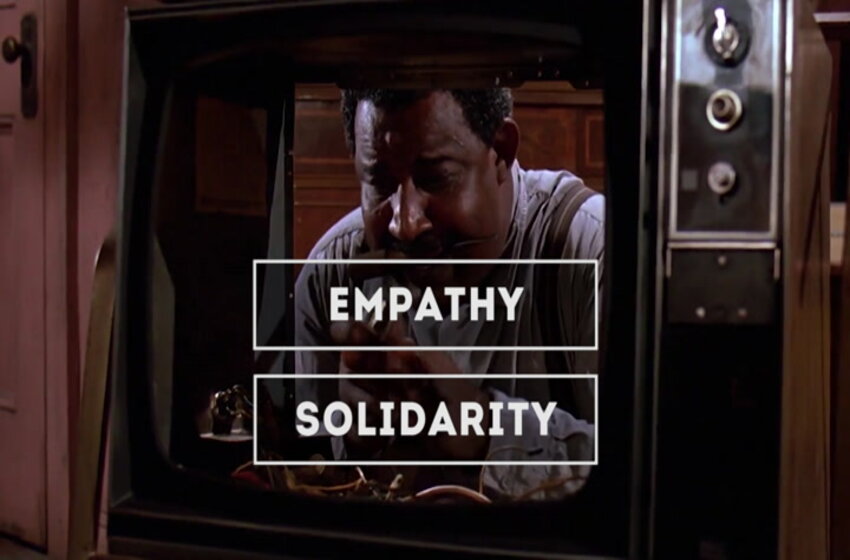 Cinema is the greatest way to change the world. It has the power to reach the masses across the globe and influence it. Various genres of films have tried to address various issues in the history of world cinema. In today’s article, we will be talking about one similar genre that can revolutionize the globe: Solidarity movies.

“support by one person or group of people for another because they share feelings, opinions, aims, etc.”

Top 5 Solidarity Movies You Should Not Miss Watching

Cinema is often thought of as a strong medium of dispersing a message to millions of viewers around the globe. Each movie comes with a different message which is equally important than any other cinema of the same genre. In this article, we will be having a look at a list of Solidarity movies that speak about cinema, unity, and solidarity as a whole. The UNI (United Nations) recognizes the idea of Solidarity in promoting human and social development and a fight against poverty. The International Human Solidarity Day is celebrated on the 20th of December all over the world.

With this let us have a look at some of the best movies about human existence.

The first on our list of Solidarity movies is Invictus. This film connects to the inspiring true story of Nelson Mandela, who is the first black president in South Africa. However, his Presidency rule is joined by many hurdles in the post-Apartheid era. Hoping to solve the many issues that are present in the nation, Nelson Mandela risks a distinctive partnership with the South Africa Rugby team, aiming that the universal language of sport will assemble his people together and out of the violence and hatred. This is a highly acclaimed self acceptance movie.

This Solidarity movie is based in Long Beach, California in 1994. This film mainly centered around Woodrow Wilson High School, which has lately implemented a voluntary consolidation program. This is where Erin Gruwell begins her first teaching job. She is not ready for the state of her classroom which is engaged by students who live in fear and constantly face gang violence. The students have been raised with strict convictions to protect their own and racial discrimination is evident all over the community and school. Erin embraces the power of education and writing to help those students to learn tolerance and apply those themselves to be respectful towards others. She persuades them to write in journals and Erin compiles all these journals to a book that she named The Freedom Writers Diary.

This is one of the must watch Solidarity movies. Suffragette is based around the suffrage of women in the United Kingdom. This film narrates the story of Maud Watts, who is a 24-year-old laundress who is caught up in the Suffragette protests and she encounters many women who are conflicting for the right to vote for women. These women have been victims of oppression for far too long and identify that peaceful protests are not the way in the brutal state. This provokes the women into radicalism and they are often beaten up by the police officers and in most instances, they are locked in jail. However, this does not stop the women from their battle and they meet in secret to help each other and prevail in their mission, which is navigated by the words of Emmeline Pankhurst. After many oblations, this fight for gender equality ultimately bore fruit and resulted in the rights of women being recognized in Britain. If you are looking for movies about human connection then this is the best one.

Unity is a very powerful documentary film that focuses on narrating the story of how we are presently living in a world of violence and war. It speaks about how we are always at war with one another, our countries, and our environment. It portrays how we, even though we exist in the same world, are still not able to get along and live in solidarity with one another. The movie echoes a strong message of plea to human kind to perceive beyond barriers and live in love, compassion, and peace to all beings on this planet. This is one of the best movies about acceptance.

The movie offers the unifying effect that sports have on humans, and in this case, football. The story resonates with three football clubs in Istanbul, ( Fenerbahce, Galatasaray, and Besiktas) who have been renowned all over Europe for their everlasting support of their teams, and their mutual competition against each other, which has often succeeded in violent crashes. Currently, there is a present protest movement that is taking place in Turkey in which the police are determined to become ruthless in the way they handled the peaceful protestors. This created great angst all over the nation and this is what resulted in something remarkable occurring. The three teams joined together in unity to help the protestors and the civilians against police violence and tear gas attacks. They named this improbable alliance, Istanbul United.

On this Solidarity day, here are the top 5 Solidarity films that rightly illustrate the term. Films are a powerful tool to reach the masses. There is no other way than cinema that can reach the masses globally. So to spread the message of solidarity, peace, and equality films have often been chosen as the medium. According to Banksy,

“Film is incredibly democratic and accessible, it’s probably the best option if you actually want to change the world, not just re-decorate it.”