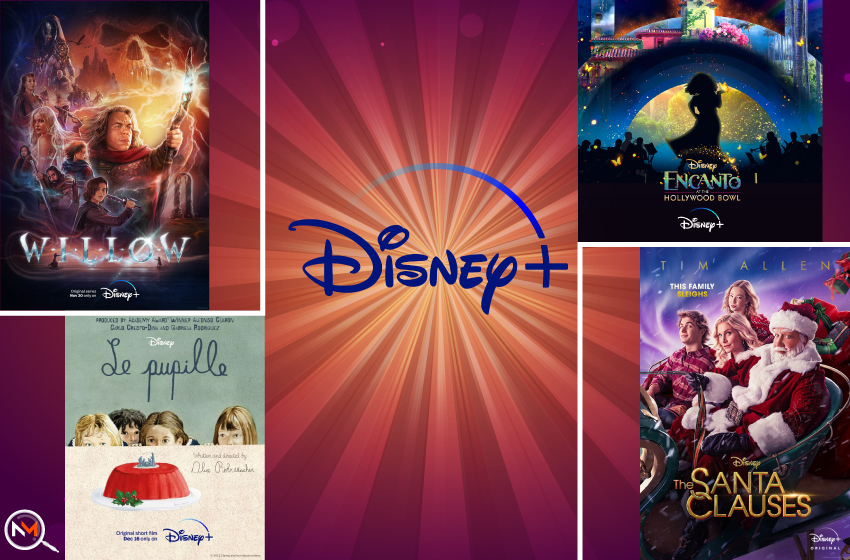 New Disney Plus Releases are already under process. The entertainment brand has already released one or two movies by now. Disney+ has been an excellent platform for watching your favourite shows and continues to be a raving entertainment zone. Christmas is already on the corner bringing in festivities and holidays. To make sure you can chill with some movies, popcorn, and drinks, we present you with a list of releases you can watch on the first day.

Top 5 New Disney Plus Releases You Might Be Waiting For!

If you are looking for some new Disney Plus releases to keep you out of your boredom, here are some recommendations for this December:

Willow is an epic period fantasy series having a modern sensibility set in a spellbound land of beauty. The series features a number of international casts including Jonathan Kasdan, Kathleen Kennedy, Michelle Rejwan, Ron Howard, and Wendy Mericle as executive producers. The story revolves around an aspiring magician from a village in Nelwyn. An infant girl is destined to unite the realms while helping to destroy an evil queen and remove her forces of darkness.

The adventure continues amidst the magical world full of trolls, brownies, sorcerers, and several other mystical creatures. The magician and the infant girl unite on a dangerous quest to places beyond their home. They must face their inner demons and join to save the world. New episodes will be released every Wednesday throughout December.

Scott Calvin is about to celebrate his 65th birth anniversary. He realizes that he cannot continue to be Santa forever. He experiences the loss of magic. He thinks of his family who could benefit from a normal life in the normal world, especially his two kids who grew up at the North Pole. Scott has to please a lot of children, families, and elves. He sets out to find a suitable replacement who would take his position and responsibility as Santa. He thought of preparing his family for a yet new adventurous life at the South Pole.

The final two episodes will be released on the first two Wednesdays of December this year!

This is one of the new Disney Plus releases that depict Jess Valenzuela’s upside-down life when a stranger offers her a clue to the centuries-old treasure. The clue might be somehow connected to her long-dead father. Jess possesses a knack for solving puzzles. Her skills are put to test as she and her friends land into a series of clues hiding in American artifacts and landmarks.  The first two episodes will be released on the platform on Wednesday, the 14th of December 2022. New episodes will be released every week.

4. Encanto at the Hollywood Bowl

Want to enjoy an unprecedented concert spectacular? Step into Casa Madrigal! The award-winning Encanto now reunites at the Hollywood Bowl. The movie starrs Stephanie Beatriz, Adassa, Carolina Gaitán, Jessica Darrow, Diane Guerrero, Mauro Castillo, Angie Cepeda, and Olga Merediz in addition to special guests. The legendary Columbian superstar Carlos Vives appears as a special guest who transforms the historic venue into the world of an animated movie. “Encanto at the Hollywood Bowl” is set to release on Disney Plus on the 28th of December 2022, Wednesday.

5. Idina Menzel: Which Way to the Stage?

The Tony Award-winning actress and singer Idina Menzel has done great things in Hollywood. Her iconic Broadway roles include the production of “Wicked” and “Rent”. She is also the legendary voice of Elsa in Disney-housed “Frozen”. She dreams of headlining a concert at Madison Square Garden in her hometown of New York City. The movie by the filmmaker Anne McCabe takes the viewers on a national tour over the course of 16 shows as she dodges the challenges of being a working mom with a laborious travel schedule, preparing to finally realize her dream. Disney+ will feature the movie on Friday, the 9th of December 2022.

New Disney Plus Releases: Upcoming Schedules At A Glance

Here is a list of all the movies and shows you can watch on a cozy night on Disney Plus.

The new Disney Plus releases are about to keep you hooked to the entertainment platform. This December is fun-filled and so are the movies and series. We hope that this list will suffice for the entire month. That said, there are other releases on the Disney+ platform. Keep an eye on the platform to get all the notifications.