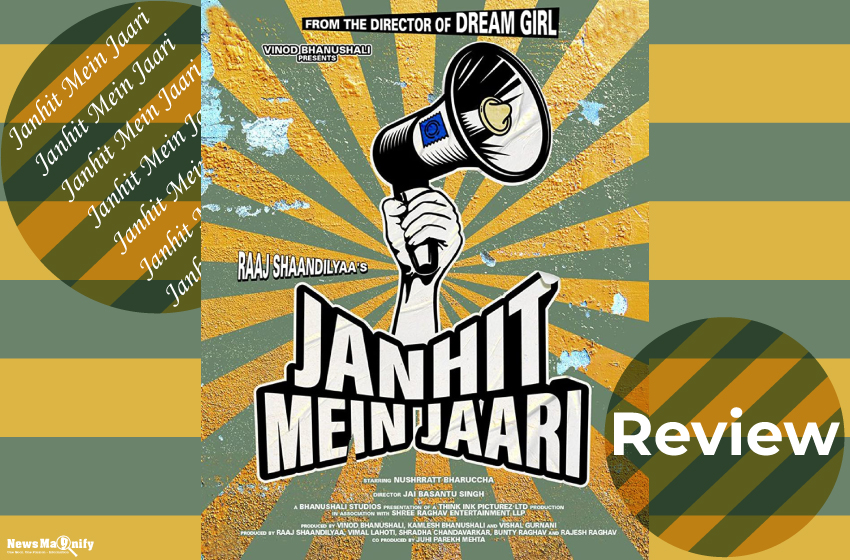 Pretty Manokamna Tripathi is the ideal candidate for a “perfect match”. By profession, she markets condoms and this is “the problem”. How can a “good Indian girl” do so much “ganda kaam”? A family comedy drama that uses comedy quite enough to make a relevant point. Here is a Janhit Mein Jaari review for you all.

Calling a condom a “chatri” has been an old joke, but that is taken as a funky element to raise awareness regarding the use of condoms in India. This film rightly narrates that it is not a sin to think about protection during sex. Janhit Mein Jaari release date was scheduled for 10 June 2022 and is running successfully in theaters.

Before we start with the Janhit Mein Jaari review, let us have a look at the Janhit Mein Jaari story. Manokamna Tripathi is a sales professional who works for a local condom manufacturer in Orcha, Madhya Pradesh. A tragic turn of incidents pushes Manokamna to devote herself more responsibly and emotionally to this job than ever before. Will she find her family that is seeped in conservation and orthodox ideologies, being by her side eventually, or will she swim through all alone? The answer to this question creates the maximum portion of this narrative. We leave the rest of the story for you to go and watch at the theaters. But before you go, let us see a  vivid Janhit Mein Jaari review.

Manokamna Tripathi played by Nushrratt Bharuccha has a ticking time bomb within her. Either she gets a job or she accepts the matrimonial proposal that her parents have found for her. In her rush, she chooses a job as a salesperson at a local condom manufacturer Aadarniya’s (played by Brijendra Kala) company. How she strides through the primary challenges of her job, spreading awareness among men and women in a small town in MP, and how she brings her highly conservative family onto her side forms the rest of the plot.

What may look like another set of plots in the heartland of India reaches us as a funny and punch-line heavy film by writer Raaj Shandilyaa that identifies and addresses pertinent problems such as contraception and abortion, mainly the use of condoms for safe sex among other factors. The movie uses a generous amount of punchlines and witty one-liners, which Raaj is famous for, to deliver the master lines. The lines have his signature. The screenplay is fast-paced throughout most of the 147-minute-run time. Even though the lines are not the kind that will create an instant recall value for being one of a kind, they are funny in most scenarios. The film has ample comedy gags playing out between all the supporting actors which offer a lot of relief to the subject at hand. The production design and cinematography are on-point, as well. The locations, even though explored in a few other films set in Madhya Pradesh before, have been used pretty decently.

Nushrratt Bharuccha carries the movie on her shoulders with confidence. Her performance is persistent throughout the film. In fact, she is the only character that has a steady and visible arc evolving throughout the runtime. Could the arc have been stronger? In our opinion, it could have been. Could the hurdles in the journey of her character have been tougher to cross? Yes. And that could have made the message more strong that the film focuses on delivering using her shoulders. It could have only made the narrative of the film that much more highlighted.

The supporting cast in this movie deserves special mention. Brijendra Kala, even though has less screen time, is ideally cast. The same is the case with Vijay Raaz, who represents the patriarchal voice in a conservative family setup. He not only picks the leheza ideally but also holds on to his character firmly throughout its film journey. Tinnu Anand, along with a couple of other supporting actors have also done a great job and one would have loved to see a little more of them. Their conversation, mainly the one between the co-sisters of Manokamna on the terrace, boosts up the dull moments in the plot. It is the punchlines offered with great timing and style that sparkles.

One of the things in this movie that stands out for no particular reason is the costume of Manokamna and the overall look. It does not blend with the setting in which the narrative unfolds. With respect to the writing, the romantic track between Manokamna and Ranjan feels too sped up and also feels the scarcity of the kind of emotional pull that it should have carried. In fact, the character of Ranjan does not have a different and well-etched arc to follow. He just offers a set of punch lines, which makes the character truly hollow.

Now that you have watched this great trailer, here is the complete cast of the movie.

After this Janhit Mein Jaari review, it can be concluded that overall, as a director, Jai Basantu Singh creates a confident Bollywood debut but he has a long journey to cover as the captain of the ship. This one is a light-hearted movie with a strong narrative that could have been made and delivered in a better way. However, what we get to see is a witty and breezy movie with its intent at the right point. According to Janhit Mein Jaari review IMDb it received an 8.2 rating out of 10.