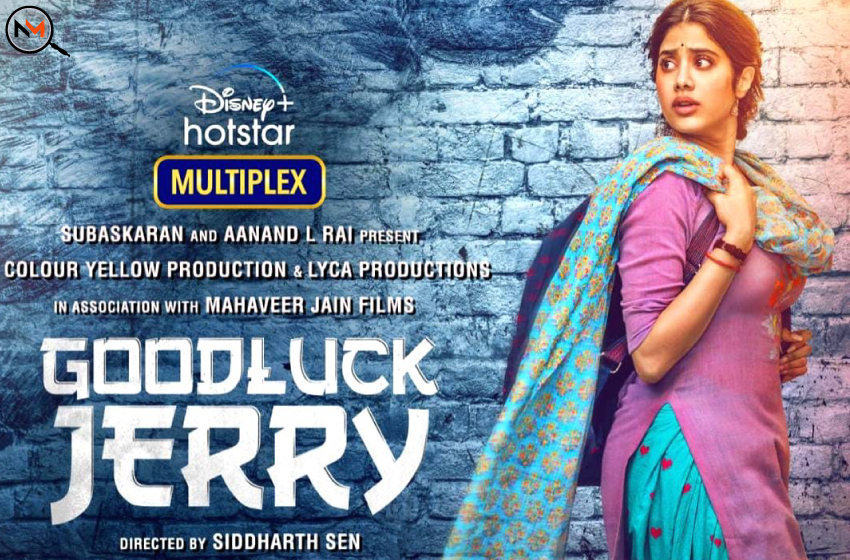 The list of movies in 2022 seems to be flooded as this is the year of relief from the majority of Covid-19 restrictions. The movies released this year have been all of the different genres and enabled distinct experiences. However, Good Luck Jerry was one of its kind. The film premiered on Disney+ Hotstar on July 29, 2022, following the trend of OTT movie releases recently. The Janhvi Kapoor starrer is literally a roller-coaster ride. Wondering why we say so? The Good Luck Jerry movie review provided here will answer all your doubts.

The movie is a black comedy crime film that explores bits of darkness, fun, and sinfulness. Woah! That’s actually too much for us as a viewer. But the various elements of Good Luck Jerry are a treat to watch as every twist is worthy enough to invest your time in. This movie is an official remake of Kolamaavu Kokila, a Tamil film, and must say that it has done complete justice to it. Also, the beauty of the original script is what has enhanced the remake too.

The film revolves around a young girl named Jerry. She lives with her widowed mother (played by Mita Vashisht)and younger sister. Both she and her mother work hard to make ends meet, however, life takes an unprecedented turn when the latter is diagnosed with lung cancer. To save her from such a deadly disease, Jerry decides to enter into the illegal drug industry. Here she is given the challenging task of delivering drugs of about 100 kgs to a customer. Want to know what happens next? Please download Disney+ Hotstar and watch Good Luck Jerry on it.

The lead actor, Janhvi Kapoor has done pure justice to her character in this movie. This can be ascertained by the way she holds on to the Bihari accent throughout the movie, which is exemplary. However, towards the end of the movie in the climax scene, there is a slight hint of her leaving the shoes of Jerry. But considering the fact that she had been given a role completely out of her comfort zone, she did a commendable job. Also, her acting looks almost flawless and pretty natural even when she is seen working at a massage parlour. This shows how much she has grown as an actor.

Another notable fact is that it is not just Janhvi who is carrying the entire movie on her shoulders. Supporting actors like Deepak Dobriyal were given a fair opportunity to showcase their skills on the screen. And as always, Dobriyal did an excellent job. The dialogue delivery was just perfect. The role of a one-sided lover needs a depiction of different emotions and Deepak surely aced it.

Our Good Luck Jerry movie review has a special mention for a popular television actor, Sahil Mehta, who will also blow your mind with his performance. He essays the role of a hot-tempered man named Jigar, who is always ready to pull the trigger on those who defy him. Mita Vashisht’s performance is also a delight to the viewers’ eyes. The emotional sequences of hers that follow after she is diagnosed with the deadly disease would definitely bring tears to one’s eyes.

The film has a good pace at which it has been directed and edited. The numerous sub-plots of the movie have been woven very intricately. The way these nested plots unfold is one of the factors that make the movie much more interesting. Moreover, it features many characters and all of them have an identity in the film. There are almost no scenes or parts which make it look clumsy or problematic. The correct usage of dialects in the film is another highlight that makes it appealing to watch.

The shift from a simple girl’s life to a chaotic drug industry was shown very smoothly. However, towards the climax, it seems that the writers were struggling with re-establishing the storyline with the integration of fresh plots. The film gets entangled between its newer plots and the ends of the already established plots. This, in turn, leads to a sort of mishmash climax. It takes a considerable amount of time for the viewer to know and understand what is going on since numerous twists are unravelled in the same period of time creating a situation of chaos.

The Good Luck Jerry review rating by Akash Bhatnagar who works at Bollywood Bubble was 4 out of five stars. He wrote that:

”Good Luck Jerry will surely be a gamechanger for Janhvi as the actress proves her mettle as an actor in this dark comedy. Jerry will steal your heart while making you wonder what her next step might be, leaving you awestruck with her trajectory.”

The Good Luck Jerry IMDb rating was 6.6 out of 10, which is considered to be fairly decent. Therefore, if you are interested in the plot then you can surely give it a try.

The Good Luck Jerry movie review is incomplete without you having a look at the trailer. The teaser is edited magnificently. The transition of a simple and innocent girl’s life to the dark drug world has been depicted beautifully. It shows how this Siddharth Sengupta direct film is actually a masterpiece.

The main cast of Good Luck Jerry has been listed below.

An Offbeat Wrap Up

Woah!  Even the Good Luck Jerry movie review was a roller-coaster, isn’t it? The numerous aspects discussed, the peculiar soundtrack, and the impeccable trailer, all make it just so surprising. The Janhvi Kapoor starrer surely has a lot to offer than what is mentioned here. So what are you even waiting for? Grab some popcorn and watch the movie this weekend. Since the movie has been released on a popular OTT platform, you can just get your phone or laptop and enjoy it right away.

We expect that it would not disappoint you as it has a gush of new plots and freshness. The songs are also not what you typically expect from a Bollywood movie. Don’t forget the theme of the film, which is ‘black comedy crime’, therefore, it will leave no stone unturned to amaze you.

Here Is The Luca Movie Review For All Animation Lovers

Minions The Rise Of GRU Review: Worth Your Valuable Time?