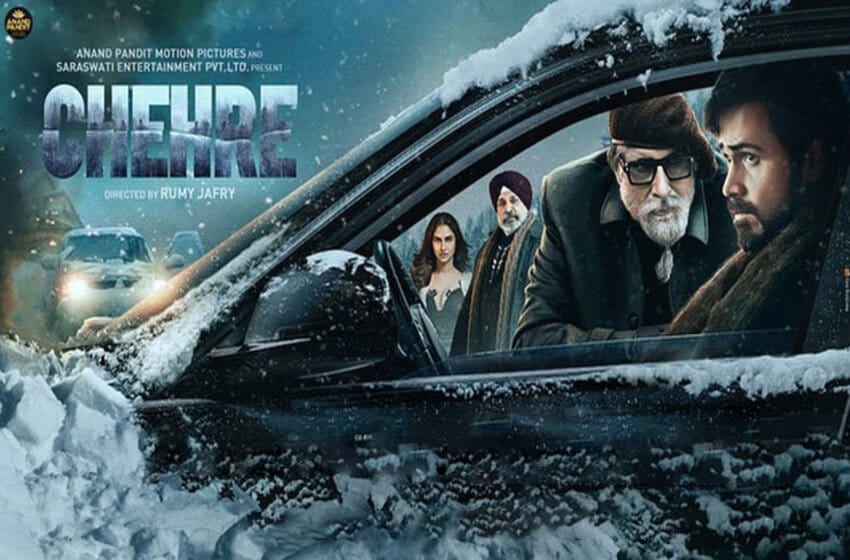 After a long wait, Chehre was released with the dream cast. But how far has it been successful to meet the expectations of the audience? What is its plot? In this article, we will see a Chehre movie review. The Chehre release date was scheduled for 27 August 2021. It got a theatrical release, so the Chehra movie download cannot be done from any OTT platform.

The chief of Delhi-based ad agency Sameer Mehra, played by Emraan Hashmi meets 4 gentlemen when he was bound to spend the night at a house in the hills because of extreme weather conditions. He gets introduced to the law veterans who are delighted to host him. Here Amitabh Bachchan plays the role of a public prosecutor, Annu Kapoor plays the role of a defense lawyer, Raghubir Yadav the judge, and Dhritiman Chatterjee plays the role of the judge. Anna is played by Rhea Chakraborty. The Chehre trailer review was great. It received immense support. Watch the Chehre movie trailer now.

The discussion begins with small talks and some drinking rounds. Convinced by the conversations, Sameer agrees to be a part of their courtroom game. He finds the game amusing until the veterans accuse him of killing his boss and taking the position in his advertisement agency. His trial starts and the unraveling of his story is what the film is about. The audience will now have to look forwards to know whether he was convicted or acquitted.

Rumy Jafry selected the cast precisely but the script lets the film down. Despite being immensely talented Imran Hashmi has a history of being wasted and this is no exception. In this Chehre movie review, it would be an injustice if we do not mention the performance of the actors. Emraan Hashmi and Amitabh Bacchan have given their best shot to make the film presentable and offer some gravity to the plot. But the actors can work to a certain extent on the script and not completely. Rhea Chakraborty was offered a decent role, but she took little action to work in it. The makers cannot be blamed completely as initially the film might have looked convincing but later it slipped out of its course in the depiction.

Everyone is a sinner, but those who are caught are termed, criminals. The execution tries to portray this thought by going off track. If you are looking forward to a gripping, edge of the seat courtroom drama, then a few loopholes in the plot can be ignored. The film is constantly ranting about the deficiency of law and justice in society citing the example of Sameer.

The atmosphere that was set was pretty good for a thriller, but the righteous demeanor and peachy tone of the story take the wrong turn.

This film has received several criticisms as it failed to meet the expectations the audience had from the film and from the cast. Chehre movie IMDb rating was 7.1/10.

The Chehre movie cast included a dream cast. Here is a list of the cast.

After the Chehre movie review, it can be concluded that this film aims to create a social outreach on the criminal justice’s state in India. The idea behind this film is interesting, but it is stopped at the white pages of the scripts. The outcome of the movie turns out to be an absurd courtroom drama that will make the audience feel longer than any longest running lawsuit.

Vivo Movie Review: Should You Give It A Watch?

Narappa Movie Review: Is It The Best Of Venkatesh Till Now?