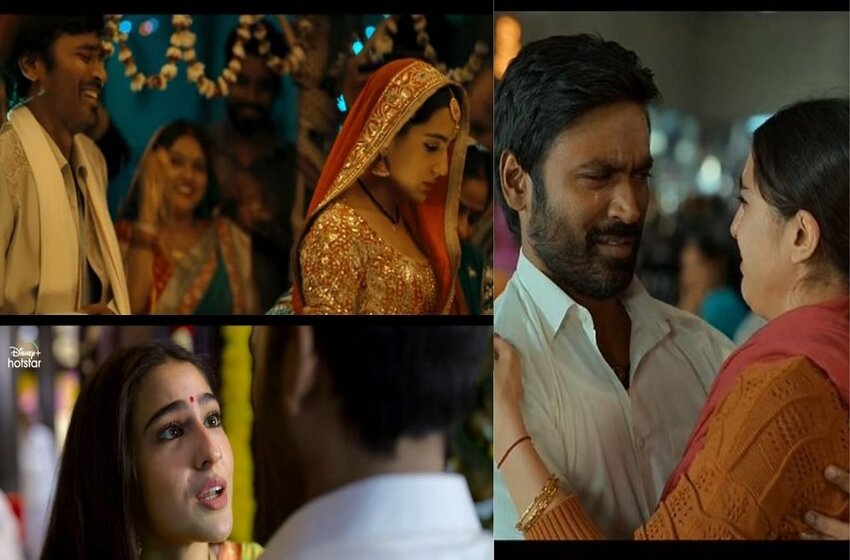 Atrangi Re by Anand L. Rai is sure to short an unusual movie, but it to some extent fails to deliver its desired result. The film that stars Sara Ali Khan, Dhanush, and Akshay Kumar was released on Disney+ Hotstar on 24 December 2021. Let us have a look at the Atrangi Re review.

Atrangi Re Review: An Overview

The plot of this film mainly deals with the long term effect of mental trauma covered with a fine, monotonous love story. Bringing the imagination on screen was no doubt a difficult job, but the film could offer more. The lively musical score of A.R Rahman with the twisted story of Anand L. Rai made this film into a single trick show.

One character in the film states that nobody has ever understood psychological disorders. The movie takes that claim at face value and covers it with a filmy yarn. Dhanush who is seen playing the part of a Tamil medical student studying in Delhi wonderfully puts him in the role that needs him to catch the broad moods from the facetious to the puzzled and then to the forceful. But then the natural acting of Dhanush can extract value even from a character that is underwritten.

On the contrary, Sara Ali Khan who plays the role of Rinku is a stubborn, deprived girl who was tortured badly by her family members after her parents passed away. Rinku is madly in love with a magician named Sajjad with whom she even tried to escape 21 times for the last 14 years, but failed. This magician happens to be Akshay Kumar.

This Atrangi Re review would be incomplete if we do not state the narrative. The film starts with Dhanush (Vishu) making a trip with his close friend Madhusudhan. But why the hell did they make that trip was still unknown. In one scene, they were seen climbing a poll to drive a network which confused the audience on their profession from doctor to engineer. A couple of scenes earlier, Dhanush encounters a despairing girl (Sara Ali Khan) who runs away from a group of men who were determined to catch her. When he wanted to help the girl, his friends stopped offering her the aid.

In the next scene, the audience understands that Rinku was forced to get married and that her family was searching for any creature that walked on 2 feet. That is how Dhanush was captured by the family members of Rinku and they two got married with the help of laughing gas.

While they departed for Delhi, they both explored that both will go their own ways once they reach Delhi, and on the train, they exchanged their love stories. That’s when Rinku shared that her love for life is a magician and she will meet him in Delhi. After reaching Delhi, Rinku was taken to the boy’s hostel where Dhanush lived. And Dhanush had his engagement scheduled after 2 days. So he planned to hide the whole story from his partner who happens to be the daughter of his college’s Dean. Once they reach the wedding venue, the bride gets to know about the real incident from a video clip that was released on the internet. Now when the bride’s family reacted and started to behave badly with Rinku, Vishu protested and left the marriage immediately. Once they reached the hostel campus, Vishu realized he was in love with Rinku and as he conveyed his feeling, Rinku notified him that Sajjad had arrived, which broke Vishu’s heart. But he wanted her to live happily with Sajjad so he asked his friend to take care of them and notify him when they left.

Now comes Akshay Kumar in the scene who is seen entering on an elephant. Rinku and Sajjad meet and they go to the cafeteria to have some food. This is when the audience and Madhu find out that Sajjad is not there and Rinku is under a mental disorder. As soon as Vishu gets to know that he rejoices in the fact that finally, Rinku is his. He stops Rinku from going as he plans to treat her. This is how the film comes to the central plot.

Vishu’s friend Madhusudhan who is a psychiatrist says that this is the result of a childhood mental trauma that Rinku went through. There is no forceful cure, only if Rinku admits she can be saved. And so they try all ways to make Rinku admit that there is no Sajjad for real. The remaining plot we keep for the audience to watch.

Atrangi Re has some high ticket cast. Here is the complete Atrangi Re cast. Atrangi Re watch online on Disney+ Hotstar.

After this Atrangi Re review, it can be concluded that the movie that has been scripted by Himanshu Sharma, requires an unconscionable degree of willing suspension of disbelief as it lets go of all likeness of logic. The artificial storyline is intended to pull at our heartstrings – all it does is stagger from one difficult-to-digest scenario to another to set up the depth of Rinku’s love for Sajjad and the strength of Vishu’s love resolve in a ‘singular’ love triangle that for the most part goes round in tedious and baffling circles. The Atrangi Re release date was scheduled for 24 December 2021.