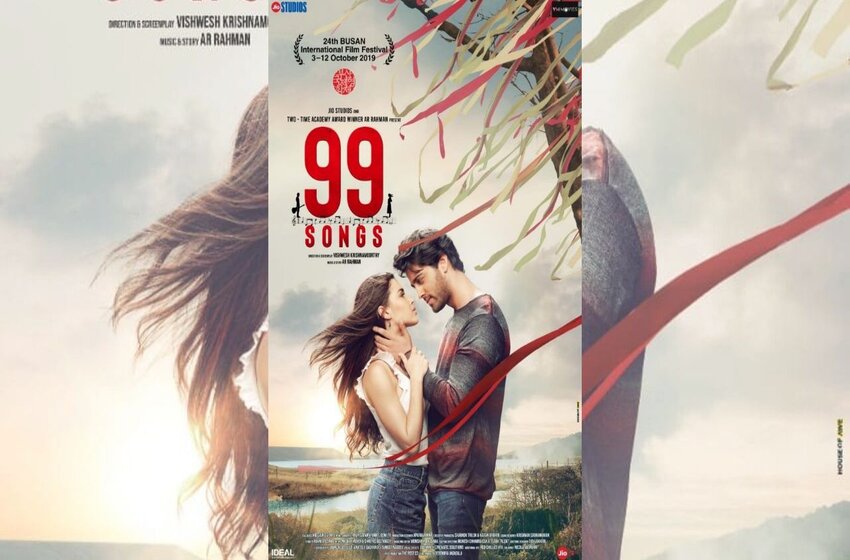 “99 songs” is a 2021 movie written by A R Rahman and directed by Vishwesh Krishnamoorthy. Here’s a 99 songs movie review.

As a young musician steps on the journey to compose a song that will unify him with his love, he is stopped by many realistic barriers. As he commences to hit the rock button, will music be his savior? This is a story of love and failure. Heartbreak and redemption. Loss and faith. All in one musical love story.

Oscar winning composer A R Rahman is now on the big screen with virtual music. The sweet and soothing effect of music is now being shown visually. Jai (Ehan Bhat) has only two things in life – his music and his girlfriend Sophie (Edilsy Vargas). But in his way comes Sophie’s rich father Sanjay Singhania (Ranjit Barot) who challenges him to compose 100 songs before thinking of marrying Sophie. Since his music list is empty with songs, he struggles hard to achieve that. This takes Jai to the beautiful and scenic hills of Shillong, where he has his task cut out.

This film portrays the curated craftsmanship of A R Rahman for art and music. But the quality of the soundtracks can be better because after all, it is A R Rahman. The film is directed by Vishwesh Krishnamoorthy, who is also a debutant filmmaker. He worked for an advertisement filmmaker. The story was written by A R Rahman in 2011 and was supposed to be made with Eros International. But after Eros international backed out from the project, Rahman decided to make it under his own banner YM Movies and is distributed by Jio Studios. There were more than 1000 auditions to choose the best lead actors. The filming started in 2017 and ended a year later. The film was first screened at the 24th Busan International Film Festival which was held at Busan, South Korea in 2019.

Coming back to the 99 songs movie review. The story is fair and clean but the portrayal of the same is not. There was a lot of scope for the good and smooth working of the film. Some scenes felt like forceful insertion. The debutant Actor Ehan Bhat had a lot of scope for acting, but his character did not demand much. He completely played his part as a brooding musician, deeply in love. His expressions were honest and did convey his part. Debutante Edilsy Vargas on the other hand had a difficult role. Her part was based completely on expression and not being able to speak. Though the transformation she had wasn’t very convincing. Along with that, the two debutantes did not have many scenes together to show their chemistry which is a prerequisite for a love story.

A R Rahman  released a digital concert on Jio Saavn’s LIVE Anywhere showcasing all the 99 songs from his film chronologically.

“99 songs” being a hindi film is dubbed in Hindi that does not give the viewers a good experience. Alongside that the story navigates around the same proposal of bollywood: Rich protagonists. In the new millennium films audience wants characters which they can relate to which is now more seen in Tamil and Telugu films. As stated earlier there are many forceful insertions of scenes for instance when the audience is introduced to Jai’s mom in flashback. It felt like the film was trying to speed up the film. Organization could have been better. This film is set to release in theaters on 16 April 2020. The running time of the movie is 1 hr 53 mins.

Overall ‘99 songs” had all the ingredients required for a musical love story. But better songs, more prominent execution and a bit of extra look on the Mise-en scenes could have done wonders with this film. Lastly, according to Manisha Koirala’s persona says, “Music is the last surviving magic in the world”.