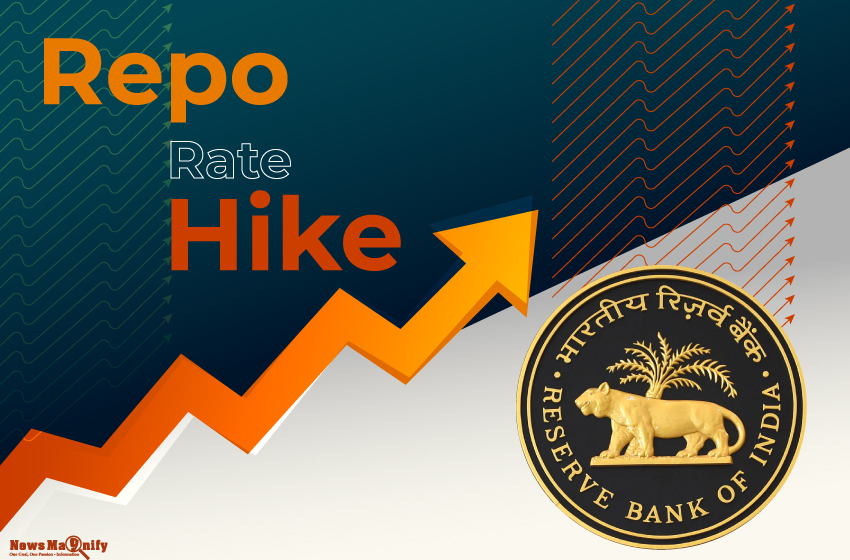 In this bi-monthly review on 08.06.2022, the RBI (Reserve Bank of India) created a repo rate hike by another 50 basis points. This shift, and the aim of RBI on the withdrawal of its cooperative policy, both in response to increasing inflation, are anticipated to lead to a further increase in the rates of interest in the banking system.

The 50 basis point repo rate hike, which follows a 40 basis point hike on May 4, has been completed with the notion to control inflammation. Considering that headline inflation has increased by 170 bps between February and April this year, the Reserve Bank of India has anticipated it at 7.5 percent in  Q1 Of FY 22, 7.4 percent in Q2, 6.2 percent in Q3, and 5.8 percent in Q4, along with a baseline inflation of 6.7% for 2022-23.

The RBI tries to bring inflation down to its aimed 4%. The two repo rate hikes over the past 5 weeks, completing 90 bps, take the rate to 4.9%.

Repo rate implies the rate at which the Reserve Bank of India lends to commercial banks. When the rates of interest are increased, it makes your money more expensive, thereby ensuing in a decrease in demand in the Indian economy and bringing down relative inflation. The opposite of the repo rate is known as Reverse Repo Rate. The repo rate and reverse repo rate are two important elements in the finance industry.

Even as it seems to support the recovery of the economy from the impact created by the pandemic, the concerns of RBI around inflation have been the basic factor in increasing the rates. It said in the statement released on Wednesday that,

“The war in Europe is lingering and we are facing newer challenges each passing day which is accentuating the existing supply chain disruptions. As a result, food, energy, and commodity prices remain elevated… A large part of the rise in inflation is primarily attributed to a series of supply shocks linked to the war. In these circumstances, we have started a gradual and orderly withdrawal of extraordinary accommodation instituted during the pandemic.”

How Will The Repo Rate Hike Impact Depositors And Borrowers?

While both the depositors and borrowers are anticipated to witness a hike in lending rates and providing deposit rates, respectively, over the future, borrowers are likely to be affected earlier.

Housing finance companies and banks, which have already increased their lending rates between 40 bps and 50 bps points following the 40 bps increase in repo rate in May 2022, are now anticipated to increase the rates again. If the 90-bps repo rate hike increases the lending rate by 100 bps, it will have a prominent effect on EMIs. For instance, if the rate on your home loan increases by 100 basis points from 7 percent in April to 8 percent in the next couple of weeks, the EMI levied on principal outstanding of Rs 50 lakh for 15 years will increase from Rs 44,941 to Rs 47,782 — a hike of Rs 2,841 monthly if you keep the tenure unaltered.

Should the rates increase by 150 bps by the end of the year, the loan rate would increase to 9.5 percent, and the EMI for the same loan to Rs 49,236 — a hike of Rs 4,295 each month. This would severely affect individuals whose incomes have already reduced compared to pre-Covid levels.

Given the projected inflation of the Reserve Bank of India of 6.7% for 2022-23 and improved concerns around it, market users feel it may go for an additional increase of 50-100 bps over the rest of the year. Indeed, RBI Governor Shaktikanta Das has stated that future plans on repo rate hikes would be in accordance with progress around inflation. Das stated,

“These are extremely uncertain conditions and it is not possible to provide an outlook on guidance… we will deal as the situation arises.”

In a report that was released after the rate hike of the Reserve Bank of India, the Bank of Baroda said,

“RBI’s hawkish policy is focussed largely on heightened inflationary concerns. It has raised the policy rate by 50bps. CPI forecast has been revised upward by 100bps in FY23 to 6.7% (our est.: 6.5%). More importantly in the next three quarters, headline CPI is expected to be above RBI’s upper tolerance band… We expect another 50-75 bps rate hike in the current cycle.”

Excitingly, the RBI eliminated the word “accommodative” from the stance of policy. The policy panel of the Reserve Bank of India, chaired by the governor of RBI, has planned to stay focused on the withdrawal of accommodation to assure that inflation stays within the set target. Repo rate and inflation go hand in hand.

The Reserve Bank of India has pumped big liquidity into the system in 2020 to challenge the effect caused by the pandemic. While this supports the recovery of the Indian economy, it has also been the primary reason for the increase in inflation.

The market operations of RBI have led to a reduction in liquidity in May. Still, whole system liquidity stays in huge surplus with the regular average absorption under the LAF (liquidity adjustment facility)  moderating to Rs 5.5  lakh crore during May 4-31, from Rs 7.4 lakh crore at the time of April 8 May, in accordance with the gradual withdrawal’s policy of accommodation. The withdrawal will also keep upward pressure on the rates of interest.

Amid Repo Rate Hike, CRR Did Not Increase

On Wednesday RBI (Reserve Bank of India) Governor Shaktikanta Das along will declare about the repo rate hike, and also stated that the MPC (Monetary Policy Committee) have not raised the CRR (Cash Reserve Ratio) in its third meeting, which was held from 6th to 8th June.

Previously, in its off-cycle meeting that was held from May 2-4, the MPC had increased the CRR by 50 basis points to 44.5% from 21st May 2022. Under the cash reserve ratio, the commercial banks have held a specific minimum amount to deposit as reserves with the central banks. The percentage of cash that is needed to be kept in reserves against the total deposits of the banks is known as CRR.

Repo Rate Hike: Will This Impact The Spending Of The Consumers?

The policy withdrawal and the repo rate hike are anticipated to affect demand and consumption in the economy. The impact is likely to be more defined in non-discretionary spending by users. According to Indranil Pan, Chief Economist, Yes Bank,

As per the RBI policy panel, the report of a normal monsoon should boost Kharif agricultural and sowing results. This will help rural consumption. The bounce in contact-intensive services is anticipated to sustain urban consumption. The surveys of RBI recommend further enhancement in consumer confidence and households’ optimism for the perspective a year ahead. Madan Sabnavis, Chief Economist, Bank of Baroda said,

“The RBI’s optimism on growth is significant because the performance of the economy in the first two months is quite impressive. The interest rate hike will help to ensure that growth is not affected as unchecked inflation can affect discretionary consumption, which in turn will affect growth.”

1. What happens when the repo rate is increased?

When the repo rate increases, the RLLR (repo rate linked lending rate) of banks also rises. This implies a rise in the home loan interest rate for all the borrowers. In reality, instead of raising the EMI, in most scenarios, the tenure of the loan is raised by banks.

2. Is RBI going to increase the repo rate?

3. Why repo rate is increased?

It is an avenue to control inflation in the economy. When the inflation is over the acceptable levels, the Reserve Bank of India raises the repo rate. Because of the raise in the repo rate, the home loan and also other EMIs rise, lowering the liquidity and demand in the financial system.

4. What is the repo rate today?