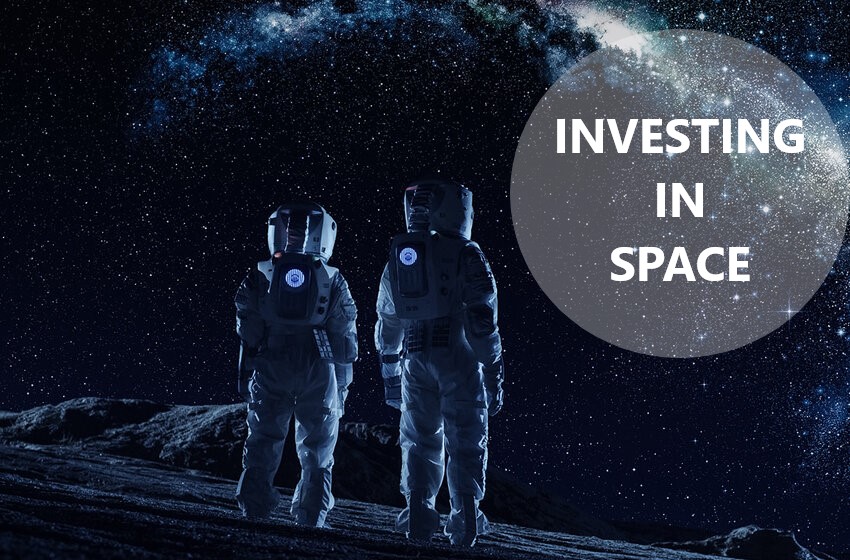 The desire to access space has opened a new avenue of investment chances that could offer cosmic returns. Even though it is difficult to think about the rapid pace of innovation and high private and public interest could create fields like hypersonic intercontinental travel and space tourism a near term reality. In today’s article, we are going to understand the potential of investing in space and some popular trends in this industry. So if you are wondering how to invest in the space industry, then you should stick to this article.

At the beginning of this year, fear of an increased rate of interest contributed to a tech sell off and many investors left riskier developing technology companies, startups, and other highly fluctuating investments within the space industry. But the latest geopolitical scenario of the Ukraine-Russia war has reinvited interest in varied segments of the space industry. Aerospace and satellite entities that offer military defence and “earth intelligence”.

Investing In Space: The Final Frontier

Over the last decade, manufacturing innovation and technological advancements have redefined what was before only known as fiction. From AI (Artificial Intelligence) to driverless cars, the tech sector is on the edge of a massive evolution. And it is not varied from the space sector.

Since humans first set foot on the moon in 1969, the cost of space launch of the satellites, rockets, and other space machinery has become more affordable. Along with that, a combination of public and private funding and raised competition, the cost of going to space has continued to fall.

As per the 2018 estimates, NASA (National Aeronautics and Space Administration) spends an approx of $152 million on each launch. Yet, private entities like SpaceX, which was founded by tech innovator Elon Musk, have created spaceships that can attain orbit for a fraction of the cost. For instance, launching SpaceX’s Falcon 9, which is a reusable rocket, is anticipated to cost nearly $30 million.

Similar to that, Blue Origin, a space entity founded by billionaire investor Jeff Bezos, has developed a group of commercial reusable space travel satellites and rockets. As an outcome, the space launch sector has evolved into an increasing business, with many global entities rising to secure market leadership.

The altering space economy also implies that greater accessibility and affordability may initiate a new era of innovation, widening the door to investing in space to get behind the entities that could benefit from this trend.

Investing In Space: 3 Space Stocks To Watch Out For

In July, while the billionaires were dominating the headlines, the U.S. The Department of Commerce released an opinion piece too much less fanfare stating the U.S. requires the best possible data to help track some 29,000 items in space orbit now and the anticipated 50,000 latest satellites expected by 2030. While the key point of the article was to point out a cloud-based data repository, it also highlighted the evolving importance of satellites.

That in turn is just one of the avenues by which companies that are related to space are making money. The business of space also involves building the rockets to get satellites into orbit and laying the foundation for space tourism. According to  State Street Global Advisors, which offers one of the exchange-traded funds that is included in this look at some of the best space entities to watch today,

"Combined with billionaire private interests, it is clear that the pace of space technology development is not slowing down – accelerating mankind's capabilities of exploring the final frontier."

With that, investing in stocks made easy with these top 3 space stocks.

As the space sector matures, Francois Chopard, CEO of startup incubator Starburst Aerospace, states that daily rocket launches will be needed and that is just the frequency Astra is focusing on by 2025. The entity is among several startups aiming for next-generation rockets that are more effective and cheaper in comparison to their predecessors.

This California-based satellite release services company tests, designs, manufactures, and runs next-gen space services trying to allow a new generation of global communications, precision weather monitoring, earth observation, navigation, and surveillance capabilities. Astra may be a smaller participant when compared to Elon Musk’s SpaceX, but it is actually publicly traded, making it among the best space stocks to watch right now if you are investing in space.

In its most latest quarter, LMT brought in over $17 billion in revenue, with over $3 billion coming from its space sector, which creates spacecraft and satellites for commercial and government customers. The company has declared its intent to purchase Aerojet Rocketdyne Holdings Inc. (AJRD) for over $4 billion. The transaction would get a premier defense and aerospace rocket engine manufacturer under the roof of what is already the biggest defense contractor across the globe. But the deal is receiving extra regulatory scrutiny, with both entities receiving requests for added information from the Federal Trade Commission.

One thing to remember when owning a big defense contractor for its space-related actions is that they are a relatively small part of the business. So even if the space sector goes gangbusters with commercial orders, other parts of the business might suffer if, for instance, the Pentagon’s budget gets cut. This is indeed one of the ideal space investment stocks.

This space travel company creates advanced space and air vehicles and tries to offer spaceflight services for private researchers and individuals. Much like the rocket that carried Virgin Galactic’s founder Richard Branson to the edge of space, the stock of the company shot higher in July 2021 but has since come down.

Shares trade for nearly $31 each share, well off their July peak of over $50. As intimidating as its rocket planes are, consider that the business has no revenue and is functioning at a loss. That is often the scenario with many young entities and is not necessarily a bad thing, and the entity narrowed its loss substantially in the first quarter. But investors do have to balance the thrill of a story stock with the likelihood of it eventually receiving money. Still, if the stock can attain $52 on a relatively early stage flight, there could be a potentially prominent upside if the plans of the company really do take off, enabling investing in space worthy.

Investing in space offers long-term opportunities. This area of the market stays relatively uncrowded, with only a handful of participants available to the public, as most space entities remain private. However, there are also several risks to watch out for such as any thematic investment. There are other options like investing in space mining which you can look up to. So before making any investment, consider reviewing any available data to evaluate how space exploration might play an important role in your portfolio. So we hope, by now you have got the answer to your doubt that is space a good investment.

Before You Invest In Rental Properties Know These Important Things