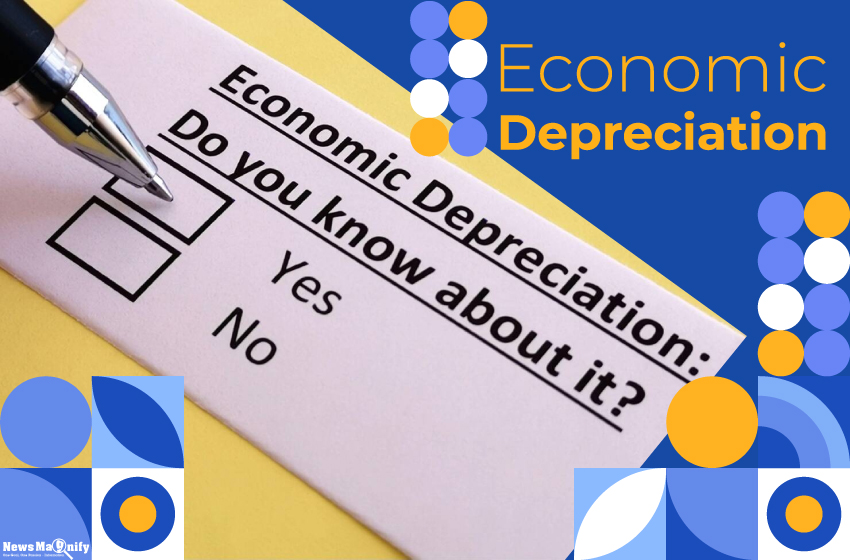 Economic depreciation is a gradual reduction in the value of assets in a span because of some major alterations in the factors important to the economy. These forms of depreciation are prominently associated with real estate where the property can dramatically alter its valuation because of sudden events such as the closure of roads, depleting neighborhoods, or unfavorable scenarios.

How Is Economic Depreciation Registered In The National Accounts Systems?

Economically, depreciation is registered as the decrease in income owing to the loss in value of capital. Depreciation is also called the “Consumption of Fixed Capital” for this purpose.

While shifting from “gross” metrics to “net” metrics, depreciation is decreased from the gross value of the variable. An economic depreciation example may include Net GDP can be measured by subtracting depreciation from gross GDP (Gross Domestic Product).

There are two prominent elements that lead to the reduction in the value of an asset:

Together, these two factors impact how the prices of an effective change with time. However, in a strict respect of the term, depreciation may only report for the second factor.

Why Do Assets Depreciate?

Assets might depreciate because of the normal process of aging or because of some evident external factors. These include:

Products that last a long term are bound to get impacted because of constant utilization. For example, the machine elements in a company might operate smoothly for the first few years. However, it begins to malfunction and it becomes slower at later parts. This is depreciation that is caused by the wear and tear of the machine and is portrayed in its market value. Hence, if the company were to resell the machine after utilization for a few years, then the value of the resell would be lower as the machine is not in a similar scenario, physically, as it was before.

The percentage of equipment and machinery might become obsolete with time. In the same way, old machines might be replaced with equipment that has the latest technology in it which makes it more effective. Hence, the obsolete or old equipment would be more exposed to depreciation as repairs cannot be done on them.

This implies to the accidents faced in the workplace that can create an asset to depreciate. These accidents are the form of mishaps that are commonly faced in the production procedure. This finally leads to these assets being scrapped untimely. Transport elements might be more vulnerable to these types of damages.

Goods that have an expiry date related to them or those that are ephemeral are exposed to loss in value over time. As the expiration date comes nearer, the value of the item reduces. Similarly, intangible assets such as patents, intellectual property rights, and many more also have expiry dates associated with them. Hence, as these rights expire, the commodity or item against which the right was provided loses its market value.

There are two procedures for calculating functional or economic depreciation. They include:

Via The Value Of Items Produced With The Asset

The depreciation of equipment or machinery can be calculated by the value of the output it offers. For example, if a machine can formulate 40 units of an item in a day, then it is more precious in comparison to the fact that if it were to manufacture 20 units in a day. If the goods are valued at US$5, then the initial value of items produced by the equipment is US$200, but after depreciation, the value turns into US$100. Hence, the depreciation, in this scenario amounts to US$100.

Through The Resale Value

Economic Depreciation: How It Impacts The Capital Stock In An Economy?

Where  Kt+1 implies to the capital stock in the next time,

When depreciation is considered as a constant value that is not proportional to the prevailing present stock, then the next period of capital stock is measured as follows:

The implications of the variables stay unchanged.

Every asset, be it intangible or tangible are subject to economic depreciation. It is just the policy of the company on how this can be evaluated and the impacts be followed differently. Depreciation of the economy is given more weightage by the investors as it impacts the portfolio they are holding and it also affects their complete net worth.

Global Inflation 2022: Has History Been Repeated This Time?