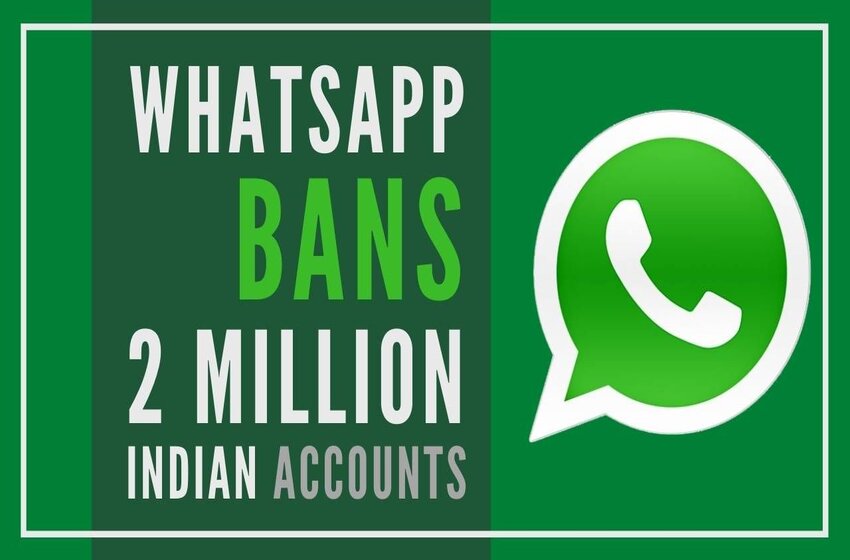 Recently WhatsApp announced that it has restricted more than 20 lakhs Indian accounts from availing its services in October 2021. Earlier it had banned nearly 30.27 lakhs accounts in India for disobeying WhatsApp rules for accounts. As stated by the latest IT rules in “India-Intermediary Guidelines and Digital Media Ethics Code” Rules 2021, WhatsApp generates monthly reports on the actions that are taken by the company in respect to the complaints received from the users of WhatsApp in India.

After WhatsApp turned to be a major platform for the spread of rumors and fake messages in India that led to various law and order scenarios like riots, several steps have been taken by the platform to stop this misuse and as per WhatsApp rules for accounts, it will ban your accounts if they receive more than one go two complaints about the account that you are using.

They have also taken initiatives to promote users to report problems and also enact measures to alert the people on the possible fake news and spam messages that are forwarded.

While the messages of WhatsApp are said to be end to end encrypted, it does not imply that the users can sway away with anything they do with their accounts as the company keeps track of various metadata. On the official website, WhatsApp clearly states that it will immediately ban accounts if they find any user violating its “Terms of Service”. This is the latest WhatsApp rules for accounts.

8 WhatsApp Rules For Accounts You Must Know

Now you may wonder how to determine the actions that can end up banning your account. So here we are with the answer. As per the “Terms of Service” of WhatsApp, committing these 8 things may force the company to ban or restrict your account as well. Also for several offenses, the platform may give the metadata of the user to the police for legal actions against them. So let us see the 8 WhatsApp rules for accounts if violated can cause harm to you and also your account.

WhatsApp has distinct rules against imitation. As per their guidelines, the accounts of WhatsApp will be banned if it is found that you have opened an account for someone else who is unaware of it and “impersonated someone”.

If you misuse the app and spam users who are not in your list of contact then WhatsApp will restrict or ban the account. WhatsApp will also take action against you if you “involve sending illegal or impermissible communications such as bulk messaging, auto-messaging, auto-dialing, and the like.”

WhatsApp may ban you if you use third-party apps like WhatsApp Delta, GBWhatsApp, WhatsApp Plus, etc

According to WhatsApp rules in India, you should always use the official WhatsApp app for the purpose of communication. Using any third-party applications like GBWhatsApp, WhatsApp Delta, WhatsApp Plus, etc may get you into trouble or banned from WhatsApp forever. WhatsApp does not allow its users to chat over such third party apps because of privacy concerns.

According to the WhatsApp rules and regulations 2021, if many users block you on WhatsApp then the platform may ban you, regardless of the fact these users are on your contact list or not. WhatsApp may contemplate your account as a source of spam text or fake news if too many people block you.

According to the new WhatsApp privacy policy, if you send any malware in the form of APK files on any of the Android phones or forward harmful phishing links to people then WhatsApp may intervene in your account and eventually ban your account.

WhatsApp evidently warns people to remain away from using its channel to harass people or spread messages of hate “such as promoting violent crimes, exploiting or endangering children or others, or aligning harm.”

WhatsApp rules for accounts can cause harm to your account if you violate them. As per the report, recently 20 lakhs WhatsApp accounts have been banned because of their law violation. Earlier this year more accounts were banned and many more to come. So those who wonder if WhatsApp new policy is safe or not to them, it is absolutely safe and it saves your account from getting hacked or compromised. The official website of WhatsApp clearly mentions the “Terms of Services” and it is recommended to abide by all of them to have a smooth WhatsApp experience.

1. What are the guidelines for WhatsApp?

On the official website, WhatsApp clearly states that it will immediately ban accounts if they find any user violating its “Terms of Service”. This is the latest WhatsApp rules for accounts.

2. What is not allowed on WhatsApp?

There are several WhatsApp guidelines that we have mentioned above. One among them is WhatsApp will ban you if you send malware or phishing links to users.

The Rules were enacted on May 26, 2021. It said that "The Rules are designed to empower ordinary users of social media. The victims of abuse on social media platforms shall have a forum for redressal of their grievances. The IT rules were finalized after due discussion with various stakeholders."

Facebook To Meta: A Change For A Better Tomorrow