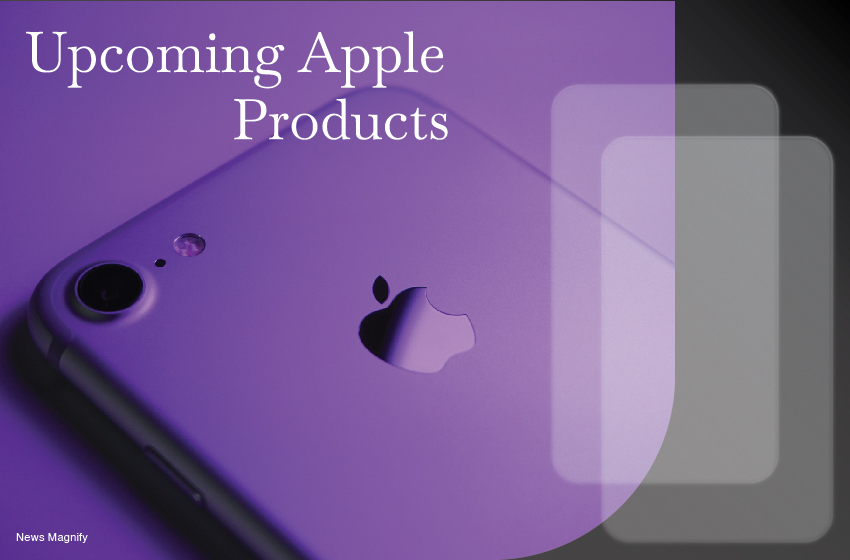 The first event of Apple this year, Peak Performance offered us some incredible products that include M1 Ultra chips and M1 Max, Studio Display, Mac Studio, iPhone SE 3, and iPad Air 5. All this has got the audience more excited about the upcoming Apple products for this year.

At the top of our most wanted Apple product list is a prominently redesigned iPhone 14 and the long anticipated AirPods Pro 2. How early can the audience anticipate receiving these devices, and what anticipating latest features will they bring with them? In this article, we have compiled the names of upcoming Apple products that you can expect to release this year.

Upcoming Apple Products: What Big Launches Can We Expect?

The rumors are revolving around what to anticipate from Apple this year. Of course, nobody can know what is on the cards until the official event comes into play. But we have found the opinions of famous analysts and experts to offer you an idea of what is possible. Check out all the upcoming Apple products for 2022.

The next flagship phone of Apple is anticipated to get some of the most prominent upgrades in years. As per the famous Apple analyst, the latest iPhone 14 Pro series may portray a notch less design, a punch hole camera, and under display Face IC sensors.

Moreover, the largest rumor is that the iPhone mini could go away with respect to a larger 6.7 inch iPhone 14 Max. The primary model of the iPhone 14 will likely be a 6.1 inch product. So, that still implies there will be 4 devices in the iPhone 14 series.

Along with that, there are rumors about Touch ID that are being included in the side button, but this is unlikely to be witnessed until the iPhone 15 in 2023.

With the M1 chip, this company shocked the whole industry, thanks to its high power efficiency and performance. Since then, the M1 series has got Pro, Ultra, and Max, variants, an unbelievable upgrade for creators.

However, in its event that took place in March, Apple implied that these chips were the last supplement to the M1 family. So one can anticipate the M2 chip this year! And it stays to see what Apple has in its basket after offering almost every possible upgrade to its M1 Ultra and Max chips.

Along with that, rumors suggest that M2 will not be as powerful as M1 Pro or beyond chips! This is apparently based on the previous claims of Mark Gurman that the chip would have a 10-core GPU, 8-core CPU, and 4 efficiency and high-performance cores.

Along with that, M2 may power the latest Mac mini, MacBook Air, MacBook Pro, and iPad Pro that will release in the second half of this year. However, the release date is not sure as of now. And like the M1 series, the M2 series will boast 4 chips which will be released gradually.

AirPods Pro was launched in October 2019. Hence, the updated variants are long due now. Hence, after AirPods 3, the following much-anticipated earbuds are Apple AirPods Pro 2.

Mark Gurman of Bloomberg and Apple analyst Ming-Chi Kuo have stated that we can anticipate AirPods Pro 2 in Fall 2022. These premium earbuds from Apple will probably offer a more compact design and also a new wireless chip.

This will likely discard the short stem that sticks out at the bottom of the present AirPods Pro. Of course, they will bring impressive latest features, which include Lossless audio support (ALAC), a significant upgrade, Find My sound consolidation to help people locate the device conveniently, and perhaps built-in fitness tracking as well. This will surely increase the appeal even more. They will most probably release in the second half of this year.

As per the renowned analyst Ming-Chi Kuo, the iPad Pro 11-inch model will receive a mini-LED display upgrade, which is the same as the one we see in the present 12.9-inch model. However, Ross Young differs from this idea. If this turns true, it would be a massive leap as it enables more control over contrast and produces great colors while being brilliantly bright.

Even though the form factor is unlikely to alter, the latest models of iPad Pro might sport titanium chassis in place of the aluminum presently used. As per Bloomberg, this could come with MagSafe compatibility in iPad Pro for the first time.

The 2022 iPad Pro is anticipated to receive reverse wireless charging, enabling users to charge a Qi-enabled AirPods or iPhones by placing them on the rear of the tablet. Moreover, the iPad Pro might also receive the M2 chip, enabling it to be much more overpowered in comparison to its predecessor, the M1 iPad Pro.

There is one more thing: the latest Apple Pencil. However, the rumor dates back to last year, so we are not sure if it is actually coming this year.

After 11 years of the similar old design, this could be the year that Apple released an iPad with a redesign. As per DSCC quarterly reports, Apple is creating an iPad with angular edges and also a full-screen display.

The jury is still out on this one.  Since the iPad 9th gen got an A13 Bionic chip, iPad 2022 will receive an A14 bionic along with Bluetooth 5.0, 5G, and also Wi-Fi 6. However, there still will not be big camera upgrades. Following the pattern of its precursor, the iPad 2022 might release on the 2nd Tuesday of September in 2022.

Apart from the most significant upcoming Apple products in India that have been stated in the above section, here are some of the other products that are anticipated to release soon are mentioned below. Also note that, after release, you can purchase them from the Apple Store itself.

No matter how much we anticipate, Apple will always have some surprises for us in store. We are excited to witness what the next Apple events will bring. What is the Apple product you are most excited to see this year among the list of upcoming Apple products 2022 that have been stated above? Share in the comments below.

Best Smartwatch Under 10000 That You Can Buy Now