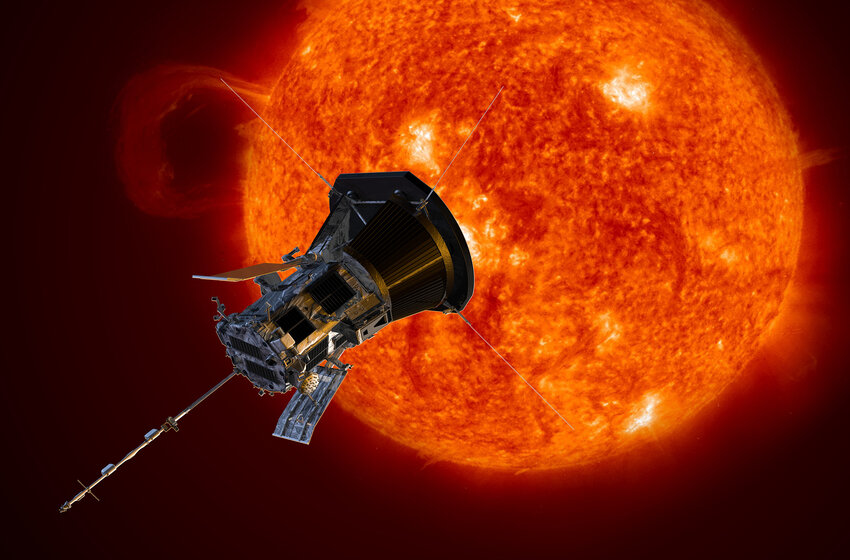 The Parker Solar Probe has created history in the arena of space. This NASA spacecraft enters Sun corona which is the upper atmosphere of the sun. This was announced by NASA recently.

How The Spacecraft Enters Sun Corona?

In April 2021, this spacecraft passed within 15 solar radii from the surface of the sun in a place where the magnetic fields dominate the solar conditions. According to Thomas Zurbuchen,

"Parker Solar Probe 'touching the Sun' is a monumental moment for solar science and a truly remarkable feat."

There is a superheated atmosphere of the sun that is called Corona which is visible only from the earth during the solar eclipse that is bound to it by the magnetic and gravitational field. At a definite limit known as the Alfvén critical surface, objects are able to escape those forces and associate with the solar wind, always severing their link to the Sun.

Scientists have predicted that the corona is among 10 to 20 solar radii from the surface of the sun or nearly 4.3 to 8.6 million miles. The spacecraft enters sun corona and it is successful in detecting the specific particle and magnetic scenario needed for the corona at nearly 18.8 solar radii, or approximately 8.1 million miles. It passed in and out of the border several times, demonstrating that the Alfvén critical surface has valleys and spikes and is not shaped like a smooth ball.

Within that region, the probe faced features known as pseudo streamers or huge structures that are rising above the surface of the Sun visible at the time of solar eclipses. Flying via the objects was similar to “flying into the eye of the storm” because of the slowing particles and quieter conditions, NASA stated.

It also made attention that may have helped scientists find out where “switchbacks,” or kinks in the solar wind begin. It identified bursts of switchbacks as it went closer to the sun, and the scientists were successful in tracing those back to the visible surface. In Particular, they found that some types of “fast” switchbacks are created in the magnetic funnels formed between convection cells on the surface of the sun.

What Do Scientists Have To Say?

The spacecraft enters sun corona was successful in only making the closest-ever pass by the sun, it is traveling at the greatest shot of any man made object ever, presently nearly 430,000 MPH. The next close pass will take place again in January 2022, when scientists will aim to evaluate exactly how other solar phenomena and switchbacks form. NASA wrote.

"Such measurements from the corona will be critical for understanding and forecasting extreme space weather events that can disrupt telecommunications and damage satellites around Earth."

According to Michael Stevens, who is an astrophysicist at the CfA and helps monitor the cup,

“The goal of this entire mission is to learn how the sun works. We can accomplish this by flying into the solar atmosphere. The only way to do that is for the spacecraft to cross the outer boundary, which scientists call the Alfvén point. So, a basic part of this mission is to be able to measure whether or not we crossed this critical point.”

Anthony Case, who is also a CfA astrophysicist of the Cup, said that the instrument itself is an unbelievable feat of engineering.

“The amount of light hitting the Parker Solar Probe determines how hot the spacecraft will get.”

The case further explains that,

“While much of the probe is protected by a heat shield, our cup is one of only two instruments that stick out and have no protection. It’s directly exposed to the sunlight and operating at a very high temperature while it’s making these measurements; it’s literally red-hot, with parts of the instrument at more than 1,800 degrees Fahrenheit [1,000 degrees Celsius], and glowing red-orange.”

Recently NASA spacecraft enters sun corona and this is marked as a big achievement in the area of space. This historic win of the Parker Solar Probe was declared at a press conference on 14.12.2021 at the fall meeting of AGU (American Geophysical Union). The panel of the press conference had CfA scientist Kelly Korreck and Justin Kasper who is presently on rotation at the NASA headquarters. Both worked on the probe at the time of their tenure at the CfA.

How Astronauts Celebrated Thanksgiving In Space This Year?

Story On The Successful Launch Of The Russian Soyuz Rocket