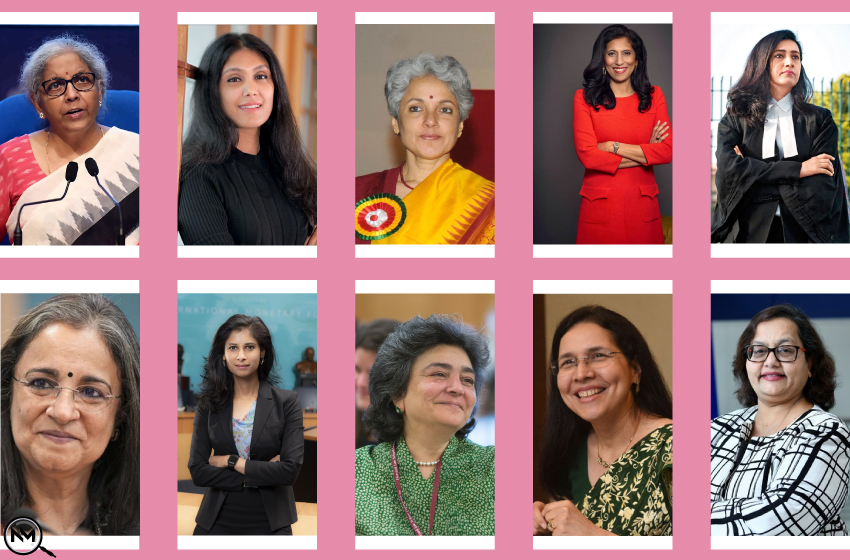 Women empowerment is not just about encouraging these beautiful souls to achieve their dreams. It is also about celebrating their achievements as this will not only boost their morale but will also help young ones in following their footsteps. These steps are necessary since for the last hundreds of years these delicate-hearted people have suffered a lot due to continuous oppression. Therefore, to turn the tables upside down it is important that they are powered not just on March 8 (the International Women’s day), but on every single day we breathe. Therefore, we brought to you a list of powerful Indian women who revolutionized the corporate sector.

Here is the list of 10 powerful Indian women who not only achieved their dreams in a male-dominated world but also extended their success stories outside the borders of our nation. It contains leaders in both political and corporate sectors to inform everyone how women are not behind in any sphere of life.

It is not easy to be accountable for the entire economy of a third-world country. But the Finance Minister of India, Nirmala Sitharamanm, has been managing all that stress on her shoulders for years now. Sitharaman also made history in 2019 by becoming the first woman to act as a full-time Finance Minister in the country. She also serves as the link between the Reserve Bank of India and the Central Government, the two most important political bodies of the country. In the course, she was honoured with numerous accolades that include a 34 rank in Forbes’ list of 100 most powerful women in the world in 2019.

Roshni Nadar Malhotra is the first Indian woman to be the leader of an IT company that was listed on the stock exchange. This Indian corporate sector achiever is currently acting as the Chief Executive Officer of the multinational IT company, HCL. She was also an alumna of Northwestern University Illinois before sitting on the chair of HCL succeeding her father Shiv Nadar, who is an Indian billionaire industrialist.

Among the several rich and influential women in the world, she secured a 54 rank on Forbes’ list of most powerful women in the world in 2019. She also earned the NDTV and Vogue Philanthropist of the Year in 2017 and 2014, respectively. These achievements are what make her distinct from others on the list.

The World Health Organization (WHO), the international health protection agency, plays a crucial role in times of medical emergencies around the globe. Being a chief scientist there is surely an honour for anyone. Dr. Soumya Swaminathan, the Indian scientist and paediatrician, acquired the position of chief scientist in WHO in March 2019 after having served as the Deputy Director-general of the organization.

She is popularly known for her successful research campaigns on the HIV virus and tuberculosis. Swaminathan was also a member of the Global Health Summit’s scientific panel. Among the several awards she conferred, the most prominent one has to be the Indian Association of Applied Microbiologists’ lifetime achievement award.

Another woman on our list who didn’t limit her achievements to our nation is Leena Nair. This British-Indian business world significantly crowned herself as the first and youngest female global Chief Executive Officer of Chanel, a French fashion house. She formerly worked at Hindustan Unilever and one of the most influential women entrepreneurs, Indra Nooyi was a mentor to her. Nair has been featured in the list of Fortune India’s Most Powerful Women 2021. In addition, she won the title of Role Model of the Year 2021 at the Great British Business Women’s Awards.

How would we miss out on someone who has made exemplary accomplishments in the law and order sector? Karuna Nundy is a renowned Indian lawyer due to her impeccable efforts in the drafting of anti-rape laws after the Delhi gang-rape case of 2012. She has always been motivated to make “a positive contribution to the world” as well as believes in “remedying injustice.” These factors set her apart from other lawyers in the nation. The most highlighted attainment of hers has to be grabbing a place in the list of Forbes’ Self Made Women 2020. Nundy also acquired titles of “Agent of Change” by Mint and “Mind that Matters” by Forbes.

Madhabi Puri Buch’s achievement is one of the most recent ones since, on March 2, 2022, she emerged as the chairwoman of the Securities & Exchange Board of India (SEBI). She was the first woman to head SEBI and also the first one of the private sector top-notch executives to be able to lead the regulator of the Indian stock market. Buch has completed her studies at St. Stephens Delhi and IIM Ahmedabad. Her notable work portfolio includes services in PRADAN, Idea Cellular, and even the ICICI bank. She has never limited herself to one sector and has continued exploring fields even out of her comfort zone.

If you thought being accountable for one country’s economy is a huge thing, what about being responsible for all the economies in the world? Well, Gita Gopinath has definitely undertaken one of the most difficult tasks in the world being the Director of the International Monetary Fund (IMF). Since January 21, 2022, she has been serving as the organisation’s First Deputy Managing Director. In addition, Gopinath is also the co-director of the  International Finance and Macroeconomics program by the National Bureau of Economic Research. The most notable accomplishment of hers is definitely being a part of the Financial Times list of the “25 most influential women of the year” in 2021.

Zia Mody is the best blend of the law and corporate sectors. She is one of the most powerful Indian women in both fields. Her achievements as a lawyer are commendable. In addition, her efforts in the establishment of AZB & Partners can’t be ignored as well. The former Attorney General of India also provides advice to major private equity houses such as Bain Capital, KKR, and Warburg Pincus. She ranked first in the list of Fortune India’s most powerful women entrepreneurs in 2018 and 2019.

Zarin Daruwala took charge of the Standard Chartered Bank, India in 2016 after the firm had incurred immense losses and was even struggling to survive. Zarin’s strong leadership, strategies, and work standard improvements led SC to be the second-largest contributor to the global profits of its group in 2020. She scaled up the retail bank operations with advanced technology, competitive product offerings, and increased focus on clients.

Kaku Nakhate has been serving as the Chief Executive Officer of the Bank of America, India. This contender in our list of powerful Indian women is the longest-serving leader of any foreign bank in India. Due to her leadership, the Bank’s fixed income has increased significantly. Moreover, the forex contributions have also gotten better. In the pandemic situation, banks across the world worked closely together and Nakhate made notable efforts in doing so.

The powerful Indian women have aided in the upliftment of various sectors in the country. Such women achievers and contributors mentioned above are worthy enough to count on. Further, the achievements made by these Indian female role models are quite inspirational for the younger generation of females who might be the face of our nation tomorrow. Therefore, it is recommended to share this article with every girl to encourage her in chasing her dreams. In addition, for a global perspective, you can refer to the Forbes Powerful Women’s List: 2022.

These 10 Business Qualities Will Make Your Business Successful