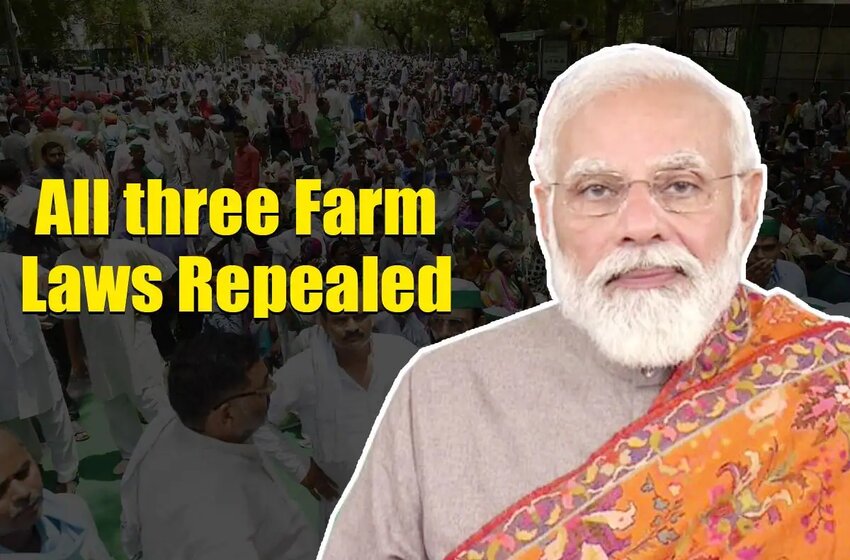 On Friday, Prime Minister Narendra Modi made announcements of farm laws repealed that was introduced last year and which was the reason for huge protests of over ten thousand farmers especially in the state of Haryana and Punjab. Before anything, you may look for repeal meaning. Repeal implies abolishing for taking back a certain statement or decision made earlier.

While addressing the nation on 19 November, Modi appealed to the farmers who were protesting to return to their homes. He asserted that the Indian government will set up a committee that will address all the problems that impact the farmers. Farmer groups, scientists, central and state officials will be in this new panel.

The aim of bringing these three farm laws was to entitle farmers, especially the small farmers. The three laws were for the benefit of the farmers and many farmers across the globe welcomed it, as said by the Prime Minister. However, only a section of farmers protested against this. He said,

"We couldn't convince that section of farmers despite our best efforts. We have decided to repeal those three farm laws."

He further said that the process will be completed by the government in the parliament’s winter session.

What Were The Three Farm Laws?

Before we get into more details of this issue, let us quickly have some highlights of what are farm laws India that were passed by the Parliament in September 2020. Here are the 3 Farm laws 2020.

This act enables the farmers to engage in trading of their agricultural produce beyond their physical market that is notified under varied state APMC acts (Agricultural Produce Marketing Committee laws). This law

This law seeks to offer the framers with a structure to allow engagement in contract farming, where the farmers can enter into a direct agreement with the purchaser to sell their produce at a price that has been predetermined.

This is an amendment to the Essential Commodities Act, 1955, which seeks to limit the powers of the government with effect on production, distribution, and supply of specific key elements.

The Union Cabinet is likely to talk about the withdrawal of the 3 farm laws at a Wednesday meeting according to sources. The sources also hinted that there are chances for the cabinet to discuss the advent of a new bill during the winter session in respect to the Farm laws repealed.

Even though these controversial farm laws were navigating their way out, the farmers who were protesting asserted that the demonstration would be carried out until the parliament abolished the three farm laws. The meeting on Sunday was held by the umbrella organization of the bodies of the farmers, the SKM to this respect where they spoke about the future of this protest.

As the central government has agreed on the Farm laws repealed, the farmers’ union has changed their aim on MSP (minimum support price), demanding to enact a law on it. They are demanding compensation for those whose lives were lost during the protest, also the withdrawal of cases that were registered against some of the protestors, and also a waiver on the electricity bills that were pending.

“We'll write an open letter to the PM. Pending demands will be mentioned in it - MSP committee, its rights, it's the time frame, its duties; Electricity Bill 2020 and withdrawal of cases against farmers. We'll also write to him to sack the minister related to the Lakhimpur Kheri incident.”

The farmers have determined to proceed with a planned march to the Parliament on November 29 to note the passage of 1 year of anti-farm act agitation, SKM asserted. According to Balbir Singh,

“We discussed the repeal of the farm laws. A few decisions were made. The SKM's predefined programs will continue as it is – a ‘Kisan panchayat’ in Lucknow on November 22, gatherings at all borders on November 26, and a march to the Parliament on the 29th.”

“For a decision on further developments, another meeting of the SKM will be held on November 27. The decision will be taken on the basis of the situation until then.”

Farmers' ‘maha panchayat to be held on Monday

The farmer union’s umbrella body will be conducting a “maha panchayat” on Monday in Uttar Pradesh’s capital, Lucknow, in a light of strength days after the announcement of Narendra Modi on Farm laws repealed. According to Rakesh Tikait, who is the former leader,

“The biggest reform for the farmers and agriculture will be to make a law pertaining to the MSP.”

The UP farmers are also demanding the dismissal of Ajay Kumar Mishra who is the Union minister of state for home affairs, in relation to the violence that had taken place in the Lakhimpur Kheri district of the state on October 3, when the visit of deputy chief minister Keshav Prasad Maurya to Mishra’s local place was protested by the farmers. In this incident, 4 farmers were run over by a car while four others, that included a driver, a journalist, and two BJP workers, were murdered in the following violence.

As per the recent announcement made by Prime Minister Narendra Modi, there will be a scenario of Farm laws repealed,  where the three farm laws that were passed in the Parliament in September 2020 will be abolished and a new law concerning the issues of the farmers will be initiated. Modi assured that a committee will be formed that will look after this issue as soon as possible. In the above section, we have also mentioned what are 3 farm laws repealed.

Leaders Of Big Nation To Discuss About Development In G20 Summits