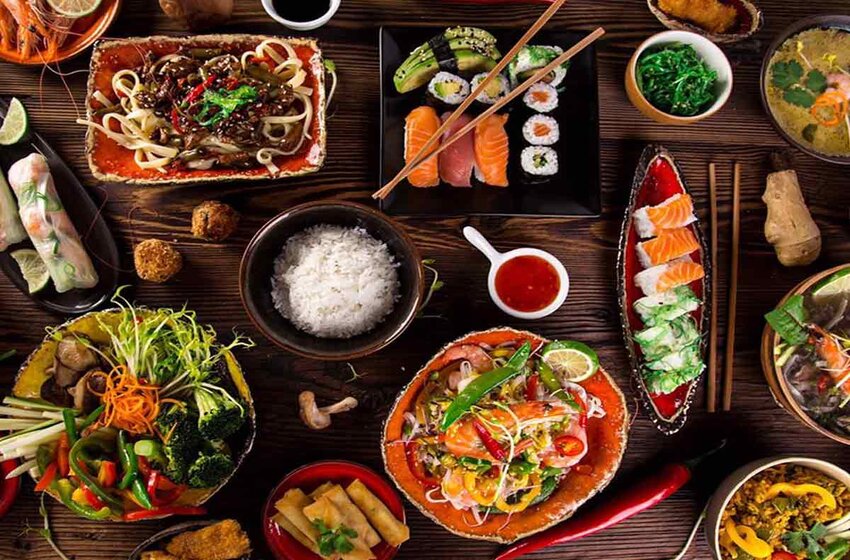 When visiting Japan, you will of course want to try the Japanese foods. There are various types of local specialties and dishes you can choose from. But this article will deal with some of the best dishes from the broad range. So without any further delay, let us begin with this article.

Top Japanese Foods That You Should Try At Least Once

Traditional Japanese food that is known as Washoku, is among the most fascinating and diverse across the globe. This is a seasonally sensitive cuisine that emerged over centuries behind the shut doors of this previously isolationist country and is presently celebrated across the globe for its healthiness, heritage, and inventiveness. Here are the top Japanese foods that you should make an attempt to try at least once to experience a different flavor all together. You will find many Japanese food recipes online that you can try at home. But here among the top 100 Japanese foods, we have chosen the top 5 to make your choices easy.

The classic Japanese food; in its homeland the creation of sushi is taken to extremes of religion, with elite chefs getting trained for decades and going to  infinite lengths to form the perfect (usually very expensive) bite. It was not always such a high-end craft. Japanese sushi finds its roots in the street food ambiance of medieval Tokyo, with pieces of nigiri served up from stalls and consumed by hand. So if you are looking for Japanese street food, then you can start with these.

The Japanese will seldom tell you that this griddle-fried dish is a “Japanese savory pancake,” or related things, but that does not quite completely illustrate it. It is prepared with eggs and flour batter that is mixed with cabbage and then fried, with other products added as per the regional recipes and your personal tastes. These can include kimchi, various vegetables, pork belly, and usually offers a topping of dried bonito fish flakes, special okonomiyaki sauce, and mayonnaise.

A staple in Japanese cuisine, you can find this food soup on the breakfast menu, along with lunch, and dinner. Miso soup is prepared from dashi stock and also miso which is a salty-tasting paste that is prepared from rice koji and fermented soybeans. There are four primary categories of miso — red, blended, white, and barley — and dozens of regional options, each of which produces a different soup. This is the ideal Japanese food for beginners.

These normally priced grilled chicken skewers are one of the preferred dishes among after-work diners that are looking for a relaxed and cheap meal with a few beers. Get inside a yakitori restaurant and you will be met with the heat of burning charcoals, with chefs who are busy fanning away at them and preparing skewers with pretty much each piece of the chicken imaginable; from the thigh and breast to the gizzard, heart, and cartilage.

This is a Japanese hotpot dish that is perfect for social dining, with noodles, raw beef, and vegetables that are prepared at your table in a shallow iron pot that contains boiling broth made from sugar, soy sauce, and a type of rice wine that is known as mirin. The thin strips of beef are generally dipped in the raw egg after preparation.

It was first prepared during the Edo Period, but failed to completely catch on because of the strict Buddhist limitations around the consumption of meat, implying beef could only be consumed on special occasions or if you were to recover from illness. These limitations were eventually taken back, but sukiyaki maintained its status as a treat dish only for celebrations, famous for end-of-year parties among families and coworkers.

Japanese cuisine was not created in one day. It has been developed for a wide span of time and has experienced various time frames. This cuisine is famous for various reasons. It offers healthy, culturally rich, yet delicious food that we don’t often find in other cuisines. In the above article, we have stated the top 5 Japanese foods that you should try as they will give you a different taste all together.