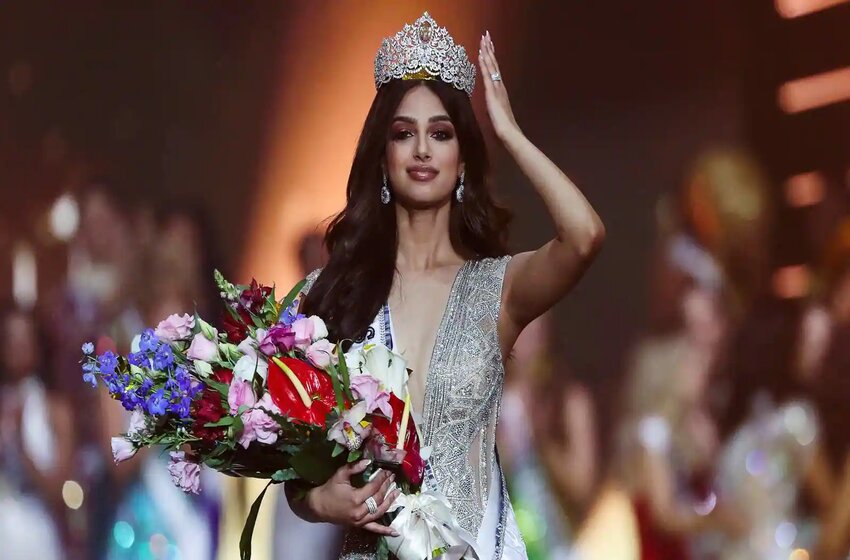 Harnaaz Sandhu from India has crowned the Miss Universe 2021 pageant on Sunday. This marked the ending of a controversial show that took place in southern Israel this year.

Harnaaz Sandhu On Being The Miss Universe 2021

During her speech on stage, she urged young people to,

"Know that you are unique and that's what makes you beautiful, stop comparing yourself to others. I believed in myself, and that's why I'm standing here today."

The Miss Universe 2021 was held in Eliot, the resort city with the top 80 women around the globe competing for the crown. Sunday night was the final day of the competition, where eliminations narrowed down the finalist list until the last two Miss Universe contestants for 2021 stayed.

Comedian Steve Harvey hosted the show who at one time in the night asked Sandhu,

"I hear you do some pretty good animal impersonations, let's hear your best one."

Though Harvey was later condemned online for singling her out with what many have proposed was an inappropriate question. Before demonstrating a few meows, she said look surprised that,

"Oh my god, Steve, I was not expecting to do this on the world stage. I have to do this, I have no other option. Brace yourselves, everyone."

At the next Q&A session, when Sandhu had attained the Miss Universe 2021 top 5, she took the chance to spread a message on the change of climate. she said.

"This is the time to take action and talk less. Prevent and protect is better than repent and repair."

After Miss Universe 2021 India Harnaaz Sandhu’s win was declared, she celebrated her moment with other participants on stage, shouting to a camera,

This competition of this year marks the second Covid-era Miss Universe crown. The borders of Israel were set to open to tourists who are vaccinated prior to the main event this year, which would have enabled thousands of fans to attend.

But with the appearance of the latest Omicron variant, the government of Israeli has shut its borders to foreigners two weeks prior to the competition, throwing travel preparations and plans into chaos. One participant, Miss France, tested positive for the virus upon her landing in Israel and had to quarantine — getting out during the time for the preliminary competition on Friday.

The Miss Universe event was also covered in another layer of political argument, with some countries and critics calling for boycotts — as with former international events hosted in Israel.

Israel was among the first nations to start vaccinating its population and had attained a high vaccination rate by May this year when the nation was reached out about hosting the December competition, as per a spokesperson from Israel’s Ministry of Tourism.