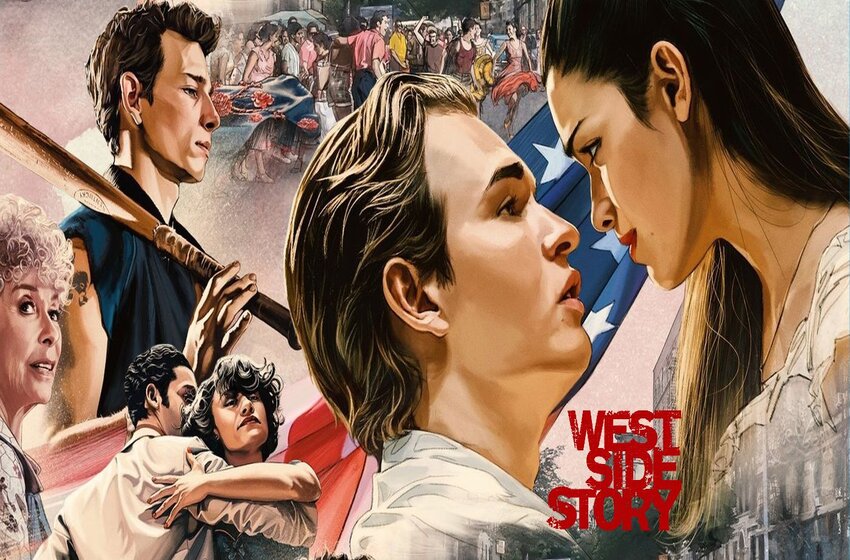 The West Side Story 2021 by Steven Spielberg is a heartfelt homage to the American cinema. This movie has amazingly lensed and strongly choreographed musicals that stand varied from the real not merely in time and cinematic sensibility. Its increased realism, contemporary sonority, and ease of spatial variations and depth also liberated it from what was conceived by Jerome Robbins for screen and stage. Let us quickly have a look at the West Side Story review.

It is love at first sight for Tony played by Ansel Elgort and María played by Rachel Zegler when their visions lock on a passionate dance floor in NYC. Much against the stereotypes of gender and quite a bold step for the 1950s, she is the first to initiate a kiss. Her move attracts him off guard. It takes a few seconds for the two to get their ‘one and only. But there is a catch. With that here is the West Side Story trailer.

Now that you know the plot, here is a detailed West Side Story review. The love birds belong to the fighting communities of street gangs of varied ethnic backgrounds. He is white (the Jets), she, a Puerto Rican immigrant (Sharks). Do the unfortunate lovers stand a chance to witness a future together? This film is inspired by the iconic play of William Shakespeare, Romeo, and Juliet. Steven Spielberg comprehends his film as not a remake but a contemporary restructure of the original classic. West Side Story cinema, primarily a stage musical by Leonard Bernstein that had lyrics by Stephen Sondheim, was played into a 1961 film by Robert Wise. The story that is set in the mid-1950s in the Upper West Side of NYC, follows two opponent gangs, the Jets and the Sharks, and a cursed love story marred by racial hatred and violence.

This love story is as primitive as the hills, especially if you have grown up on Bollywood romances, but chauvinism and racism are still existing in society. Spielberg finds that dimension pertinent to come up with a movie that does not violate the classic but pretends as its 2021 interpretation. The production, scale, and set design, musical performances, and nuances, are as good as what you would expect from any Spielberg film. But in spite of its ambition to attain near perfection, the movie does not blow your mind. The lead actors cannot offer the spark powerful chemistry that can make your heart beat for a while for the young lovers. Ansel Elgort and Rachel Zegler are talented and gorgeous but individually. He has a twinkle in his eye, she sings like magic but when together, they do not quite hit the bullseye. You will be more invested in the supporting cast of Ariana David Alvarez as Bernardo, DeBose as Anita, and Mike Faist as Riff. The plot finds its calling in these actors.

Musicals have a rhythm of their own, who better than Indians to understand that. Amazing visuals cannot compensate for the scarcity of emotional connection. Spielberg’s movie is beautiful, mainly the balcony scenes but detached, unlike the glorious musicals which enable you to feel the lyrics. You do not feel associated enough and that is when the length gets tiring.

After this West Side Story review, another big drawback is the scarcity of English subtitles for Spanish dialogue when nearly half the film is in Spanish. The director did not want to give ‘English the power over the Spanish’ by subtitling the Spanish inside the film. He said,

“I needed to respect the language enough not to subtitle it.”

The liberal approach and idea are great but it limits their reach to a great extent.

With that let us have a look at the great West Side Story cast.

The adaptation works of Spielberg for its spectacular choreography, artistic mastery, and the relevant dialogue on racial equality. However, it does not cater to weave its magic as a plot on forbidden love that it primarily is. After this West Side Story review, it can be concluded that indeed, the actors are the ones who make sure that West Side Story never loses steam and saunters along well in spite of the fact that we know what is ahead. They offer the film its frill and flair. And of course, the touch of Spielberg and the skills help of Kaminski catapulted the working into modernity and infectious bursts of energy and color.

Human Review: The Best Medical Thriller To Watch This Weekend

Pushpa Movie Review: What Gave This Film So Much Love?