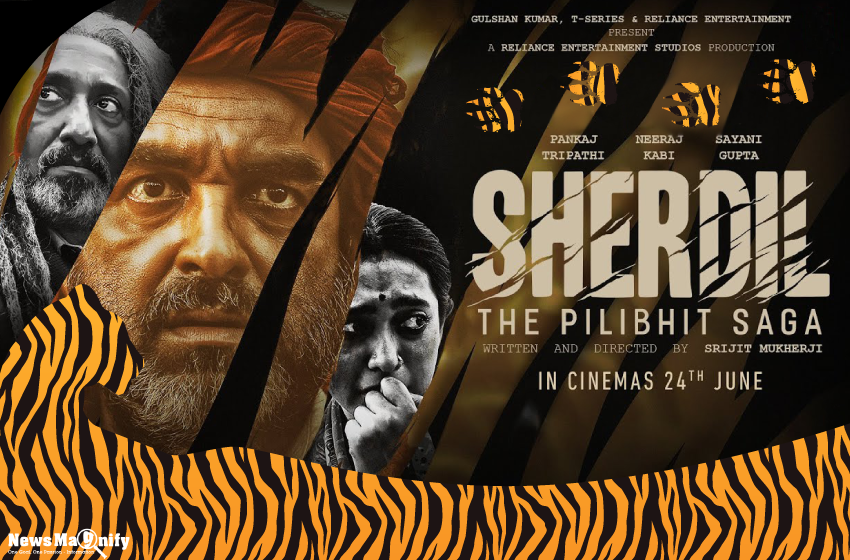 Sherdil: The Philibit Saga is moving towards its release on June 24, 2022. In the Sherdil movie, Pankaj Tripathi not only fights tigers but also the corrupt forest officials who think that people go voluntarily to die at the mercy of tigers.

This movie hugely revolves around the tragic practices of the individuals who live near the Pilibhit Tiger Reserve. The movie also stars notable actors like Neeraj Kabi and Sayani Gupta. The 2 minutes 30 seconds odd trailer offers its audience a glimpse into the regular life of Gangaram that is played by Pankaj Tripathi who is ready to put his own life on the line so that his family receives compensation worth 10 lakh, after his demise. The trailer also shows a courtroom scene where Gangaram is accused of animal poaching.

The Sherdil full movie is directed by Srijit Mukherji, who has previously directed blockbuster movies like the 2017 periodic drama Begum Jaan. He is also popular for his Bengali directorial films like Raajkahini, Autograph, and many more. The Sherdil movie Netflix release is yet to be announced.

The maker of the movie believes that the film will take the audience through an informational story, wherein the

“insightful story about the adverse effects of urbanization, man-animal conflict and poverty leading to a bizarre practice in a village that resides on the edge of a forest”.

According to Srijit Mukherji,

“It takes great courage to sacrifice one’s life to save the family and my film revolves around this heroism with a focus on man & nature conflict. This subject is really close to my heart and I hope it will ignite the same emotions with the audiences regarding various social issues in our society.’’

‘Gangs of Wasseypur’ actor Pankaj Tripathi is joyful to walk the path of eco-conservation and sustainability with his upcoming film ‘Sherdil’. Similar to the theme of the movie, Tripathi has assured that the sets of the movies are also as environmentally friendly as they can be. Speaking about waste generation hardwired to the procedure of filmmaking, Pankaj said,

"Filmmaking by its very nature is very counteractive toward sustainability. Sets and props are temporarily built, special effects cause chaos, and don't get us started on plastic water bottles."

Revealing how the Sherdil 2022 has brought an alteration in his perspective towards eco-conservation, the actor stated,

"Working on 'Sherdil' has made me more conscious about the importance of being eco-friendly on a film set. Using reusable bottles, bettering catering services, going paperless as much as possible, recycling trash, carpooling, and just shifting the overall communication on digital were some changes that we made on the sets of our film."

"With Sherdil, we are trying to do our best in order to ensure that green film production is not perceived as a myth in our industry.”

Sherdil: The Pilibhit Saga can leave a huge impact on its audience. The movie is anticipated to run well in the theaters. The Sherdil movie 2022 release date is scheduled for June 24. But before the movie releases, have a look at the Sherdil trailer.

Now that you have seen the trailer, let us have a look at the complete cast of this movie.

Sherdil: The Pilibhit Saga is encouraged by true events and is solicited to be a ‘dark humor laced satire’. The Sherdil movie brings the audience an insightful narrative about the adverse impacts of urbanization, poverty, and man-animal conflict that leads to grievous practices in a village staying on the borders of the Pilibhit Tiger Reserve. The Sherdil movie release date is scheduled for 24 June 2022.

RRR OTT Release: Know When, Where, And How To Watch