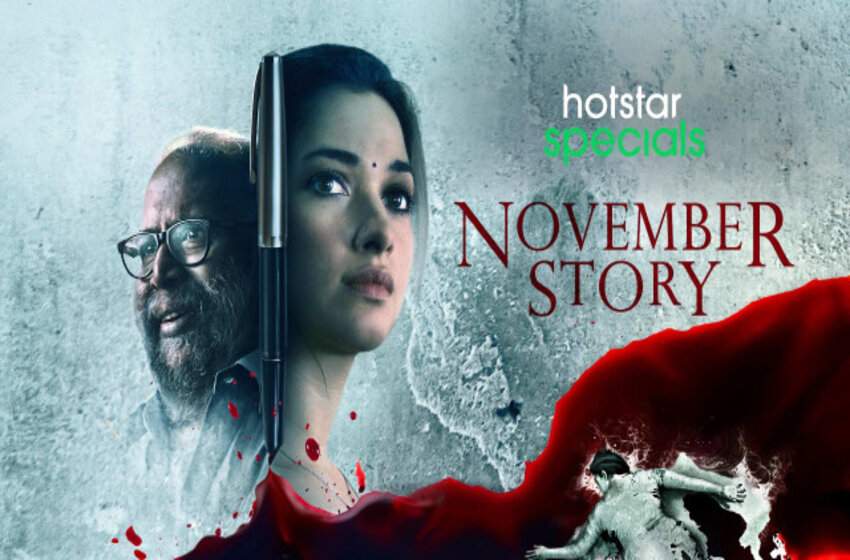 November story is the latest web series 2021, that is made in Tamil and has gained immense support. This series includes a great cast from the South Film Industry and the plot will keep the audiences glued.

There are three narrative strings that drive the concept of the November Story. In the first narrative, we see the live narration of a child, raised by a nun and who grows up to be a boy attracted to the surgery and finally, a man who is forced to sacrifice his dreams. In the second narrative, three youngsters plan the kidnapping of a mentally challenged woman who is young, along with her maid. And that third narrative that takes maximum showtime deals with Anuradha who is a computer expert who struggles with selling his father’s house who is a crime writer suffering from the second stage of Alzheimer’s.

One night the father gives his watchman the slip and goes missing. And he is found in the house which was going to be sold. But he was not found alone, there was a dead woman who was found dead by his side. Anu initially tries to hide his father’s relation with the murder but a cop, Sudalai got suspicious. So Anu had to find the real murderer to save her father from this acquisition. Everything sticks on the date of the crime which is November 16 which also seems to have a personal link, tracing back to a bus accident that happened in Tirunelveli 25 years ago.

November Story unveils largely as an enigma, and writer-director Indhra Subramanian manages to keep us glued with several likely suspects and red herrings to keep us hunching about the real murderer and the motive behind the crime. It is also an efficiently shot show that maintains a consistent tone both visually (Vidhu Ayyanna is the cinematographer) and story wise. The production values are pretty nice, and unlike many shows in the Tamil OTT space, we sense a clear creative guiding the cinematography, production design, music, and sound design.

The freedom that the OTT space offers also allows the director to play with some gore. Given that some critical scenes are set in the mortuary, there is quite a bit of blood (and even a naked body or two), and one key scene that involves a pregnant woman is not for the faint-hearted. Thankfully, the carnage doesn’t feel overdone.

What Do We Conclude?

Like in a good crime novel, Indhra Subramanian keeps giving us small balls of information in every series that seem to be inter-connected and gets us to work out the connections even while the story unveils in front of our eyes. Some of the surprises can be easily guessed, like the probable murderer, and this is largely due to casting. When we see a big-name actor in a certain role, we instantly think that they might play a bigger part in the proceedings and we are hardly surprised when our guesses come out to be true. But as with Sudalai, the director wants us to concentrate more on the motive behind the murder, and here, he is successful to hold the mystery till the end of the series. The manner in which he ties the various narrative threads together is also believable and he is successful in making us avoid the many coincidences, like how the hacker who has broken into the police’s servers is also linked to the murderer Anu is after.

It is only the final section that feels needlessly elongated and we get clichés like the central character going all alone to find the murderer, despite the cops being on her side. The other bad step is how Sudalai’s investigation unveils after a point. Rather than make him do the deduction, we get scenes that literally spell out the interconnecting aspects in the mystery.

But the great performances allow the director to build an otherwise conclusive world. Tamannaah is convincingly understated as a woman who is fumbling with too many problems at the same time, though the dubbed voice does sound very odd, and at times, takes us out of the story. GM Kumar as the aging crime writer who is initially losing his memories is perfect and so is Aruldoss, whose police character actually deserved a better ending than what he gets here. Then, there is Pasupathy, who makes the most of a layered character, and makes him an equally empathetic and repulsive personality.

World Heart Day: How To Save Your Children From CVDs?

10 Types Of Tourism Experiences That Are Surely A Bliss