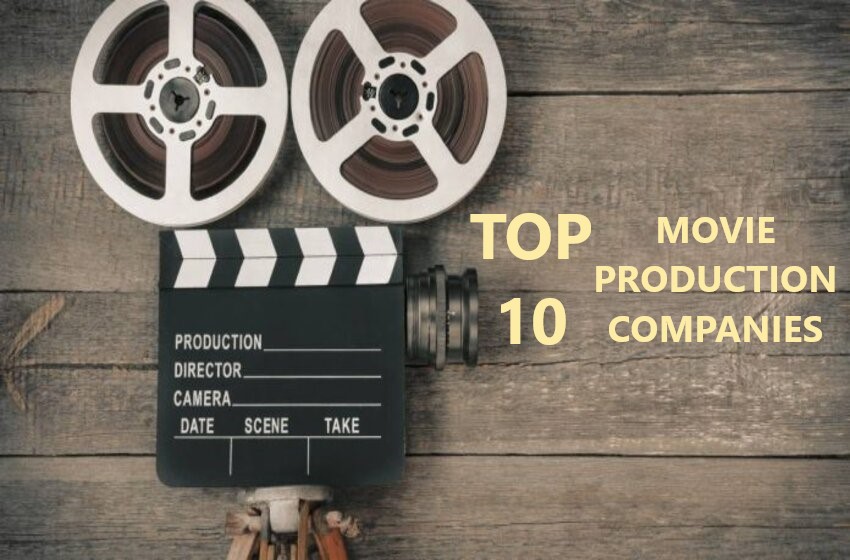 People have always loved entertainment and will continue to do so. Movies, for many of us, have been the primary source of that entertainment. Whether you aim to be in the middle of any warzone or fly off to distant galaxies, movies have always offered us an escape. But making a movie is not as simple as it seems like. A huge crew works behind that and the most important thing to make a big, commercially acclaimed movie is finance that comes from the production houses. So in this article, we are going to have a look at the top 10 movie production companies across the globe that have offered us some real gems.

The production of any film would have not been possible without studios. They offer the funding and also the resources to make it happen. With the latest movie production being held on such a larger scale, at times with filming that lasts more than a year, external aid is needed to complete such a feat.

We have all heard about big production studios associated with successful movies. Now it is time to see these movie production companies in the top 10. This rank has been made based on the acclaimed and blockbuster movies it has offered over the years.

Warner Bros. one of the leading movie production companies has produced some of the most loved films and TV series in history. Batman, Wonder Woman, the Matrix, Harry Potter, Inception, do we need to say more? Since being established in 1923 by the 4 Warner brothers, this production company has become potentially the most popular movie studio across the globe.

The studio has witnessed the likes of Stanley Kubrick and Christopher Nolan release some of the most iconic films we have ever seen. Out of the 50 highest-grossing films that were ever made in the history of cinema, Warner Bros. lays claim to 11 of them.

Walt Disney Studios creates short and animated feature films. Some of which have turned out to be the most influential movies for many of us while growing up. From the 1937 The Seven Dwarfs and Snow White to the more recent Avengers: Endgame.

Technically, Disney has made this list 4 times. Disney owns 20th Century Studios, Pixar, and Marvel Studios. Collectively, Disney would be the largest studio, with the biggest grossing and most films released out of any studio across the globe. However, with Disney producing some of the most loved and magical films, each of the studios justified their spot on our top ten movie production companies.

Among the list of biggest movie studios, this surely grabs the second position. The 20th Century brags a very prestigious title. It has produced the highest ever grossing movies with Avatar in 2009. The global box office of Avatar attained $2.8 Billion, firmly taking the highest spot. With that said, let us not forget the other great films to come out of this studio like Home Alone, Alien, and X-Men.

This studio was created in 1935 when 20th Century Pictures and the Fox Film Corporation integrated into one. After its integration, they signed young actors like Carmen Miranda, Alice Faye, Henry Fonda, and Shirley Temple who helped in popularising the studio.

In 1953, 20th Century declared it would be using CinemaScope to produce all its movies. To popularise the latest process they provided it to any rival studios along with paying the costs of conversion. This caused MGM, Colombia Pictures, Warner Bros., and Disney to all jump on the bandwagon.

A California based production studio, Pixar operates in computer-animated feature movies. A more recent studio on this list, Pixar was established in 1979 as a portion of Lucasfilm. It only changed to its own corporation in 1985 with Steve Jobs being the important stakeholder.

The first feature film by Pixar was Toy Story, which was released in 1995. The first-ever completely computer-animated feature film. Since then this movie production company has released a whole of 24 films which are mainly well-loved. Pixar is famous for releasing tear-jerking,  good quality, emotional films.

The more latest “Soul” was a classic Pixar film with a plot that revolved around the experience of death, something that Pixar appears to do amazingly at every time. Soul, Coco, Onward, Up, all of the plots are substantially influenced by death. No studio creates animated kids films about such big topics and so successfully as Pixar does.

Universal Pictures is way beyond a movie studio. This studio offers films to life in the form of a theme park. Instead of just watching how movies are created, you can experience recreations of the actions for yourself. Going to Universal Pictures will give you the opportunity to see some of the most symbolic sets within the industry, the motel from Psycho, for example. This company has made some timeless classics over the time. Their major box office hits are E.T. the Extra-Terrestrial, Jurassic Park, and Jaws, which were all directed by Steven Spielberg.

A portion of the studio is Universal Animation Studios which makes TV series and animated feature films. The feature films made by them include An American Tail, The Land Before Time, and Balto.

The Marvel Cinematic Universe has created a huge impact on the world film industry. 24 films in whole all related and part of a similar universe is a great achievement for a movie studio. These films have turned out to be undeniably famous with the Avengers: Endgame being the second-highest ever grossing movie. It has alone redefined the ability of movie franchises with a collective gross worth of the movies being $17 billion. They also have an average of 64 award nominations for every movie.

MGM (Metro-Goldwyn-Mayer Studios) is maybe the most identifiable out of any of the studios with their nefarious Lion intro. After being established in 1924 MGM became the highest and most renowned studio across the globe. However, after a not-so-smooth voyage in recent years, MGM has grown into a mini-major studio after filing for insolvency in 2012.

Despite this, the history of MGM is legendary and we think that grants it a spot on this list. With the acceptance and love of many The Wizard of Oz, James Bonds, and Gone With The Wind, how could its place among this list of top movie production companies be denied?

Lionsgate was established in 1997 after the purchase of various small production facilities and distributors. Presently, Lionsgate has two divisions with Lionsgate Television and Lionsgate film. Films such as The Hunger Games and John Wick have been products of this production house, but typically they have not produced as many big titles as the others mentioned in this list.

What makes this company stand out is its inclination to go for less conventional films. If a film is disturbing or controversial, Lionsgate is among the most likely movie production companies to take on the project. The ideal example for this scenario would be The Saw franchise.

The parent company of Sony Pictures is Sony Entertainment Inc. Its early life was quite complicated and included bidding for Coca-Cola stock and some disputes with Warner Bros. Now, they house the film studios of the division for TriStar Pictures, Columbia Picture, and Screen Gems. The studio itself was initially owned by MGM. This is among the top movie production companies in India.

Franchises like Jumanji and Spider-Man are some of the largest grossing movies to release out of the company.

This is our concluding name in the list of top 10 movie production companies. This house is the birthplace of the Titanic. Paramount Picture is a highly renowned studio and is part of the Big 6 – the largest studio in America. In spite of this, Paramount has only produced 3 movies among the top 50 highest-grossing films.

Top Gun, The Wolf of Wall Street, and The Godfather all arrive from these studios along with many other much-loved films.

The movie producer Adolph Zukor in 1916 contracted 22 actors and actresses. He respected each of them with a star, hence the 22 stars that create the Paramount intro still today. Also observably, they became the first studio across the globe to distribute all their films digitally.

Over the last 100 years, movie studios have created a solid claim on their contributions to world cinema. Without them, numerous classics would have never been seen on the big screens. We owe them for so much entertainment and joy that these amazing films have brought us.

There is no shortage of famous movie studios. Even though the major names seem to hold their position at the top, various others deserve claims as well. In this article, we have discussed the top 10 movie production companies across the globe that have never stopped to amaze us with their great cinemas.