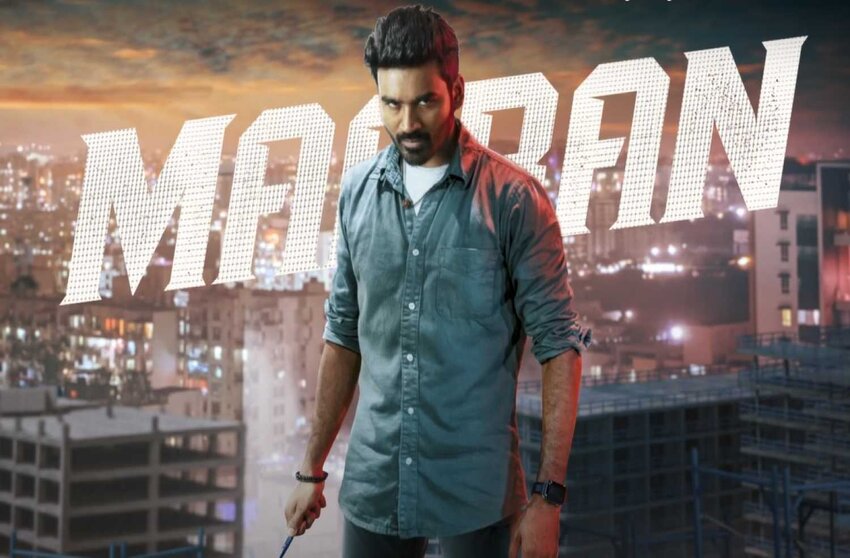 Dhanush is back with another OTT release after Atrangi Re and Jagame Thanthiram. His third OTT project Maaran, which has been directed by Karthick Naren has made the audience disheartened. With that let us have a look at Maaran Review.

10 minutes into the film, the audience can predict every twist and dialogue before the characters even spell them. There are certain films that make you question their existence, and unfortunately, this is one such film. The Maaran Dhanush release date 2022 was scheduled for 11 March.

Before we get into the Maaran review, let us have a look at the structure of the plot. Sathyamoorthy played Ramki is an honest investigative journalist. He is being killed for publishing the truth. Before his death, he tells his son, Mathimaaran, played by Dhanush, that smartness and honesty are equally vital. While Sathyamoorthy is being killed, his wife dies in a hospital after she gives birth to a baby girl named Shweta played by Smruthi Venkat. As though, Mathimaaran raises his sister.

When he grows up to be a journalist exactly like his father, it affects his sister too. Mathimaaran exposes politician Pazhani’s plan played by Samuthirakani to win the election by altering the EVM machines. Mathimaaran publishes the truth and gets himself into trouble. One day a shocking event turns his life upside down. What is it and how Maaran uncovers the truth is the basic narrative of the movie. Now that you know the plot of the Maaran movie 2022, here is the Maaran trailer.

Maaran Review: Not At All Immersive

Now that you know the narrative, let us have a look at the Maaran review in detail. With Maaran, the quest of Karthick Naren to reclaim the flavor that marked his sparkling debut Dhuruvangal Pathinaaru prevails. While the young filmmaker’s freshman effort Naragasooran is still waiting to see the light of the day, the follow-up Mafia: Chapter 1 was flashy but finally underwhelming. He showed narrations of rediscovering his form with Project Agni, the mind bending short that was part of the anthology Navarasa. And Maaran is his weakest effort as of now, one in which even his filmmaking style does not come to his help. And the writing is even more underwhelming.

As stated above in this Maaran review, the story revolves around Mathimaaran, who is a crime reporter who insists on disclosing the truth to power, following in the footsteps of his late father Sathyamoorthy (Ramki), who lost his life after exposing truths. He is fearless to a fault and is worried only about exposing the truth. With help from his cop friend Arjun (KK), he brings to notice a scam that involves fake EVMs, being planned by former minister Pazhani, who is trying to get his past glory. But what Maaran looks to have overlooked is the safety of his sister Shwetha.

Maaran is the third Tamil film in the area of three weeks to try to mix a pure genre idea with a ‘family friendly’ subplot. In Valimai, we saw madcap action fighting to co-exist along with mother sentiment. In Etharkkum Thunindhavan, the serious problem of hidden cam videos jostled for space with lighthearted scenes that involved the family of the hero. And now, in Maaran, there is a melding of a whodunit with the thangachi sentiment. And going by the results in all three films, it is evident that such fusion deliberations are not working, with one of these features drowning out the other, leading to unfavorable outcomes.

Thankfully, unlike in Annaaththe, there is little postmodernism to the brother-sister relationship. The director attempts to keep melodrama to the minimum, but we get to see the bonding between Shwetha and Maaran. But the crime section hardly has any meat. Part of the issue is how amateurishly the profession of Maaran, which is journalism, is portrayed.

In this Maaran review, it is a must to state that just half an hour or so into the movie, the plot structure begins to feel too straight forward for a Karthick Naren movie and we somehow sense that a twist is coming, and it does. But it hardly marks an impact, for the movie never gets us immersed in its space completely. The world creation is quite weak and the characterization one-note.

Now that you have known about the Maaran review, here is the complete Maaran cast:

After this Maaran review, it can be concluded that all that the audience receives is a lean plot that shifts from point A to point B without really making them care. And this thinness of the illustration does not seem to be by design. Instead, it arrives across as an attempt to make a film out of whatever footage was shot after the team realized that the movie was not turning out as planned. The Maaran movie release date was scheduled on 11 March 2022 and it was released on Disney+ Hotstar.

A Thursday Review: Women Are Taking New Shape In Cinema