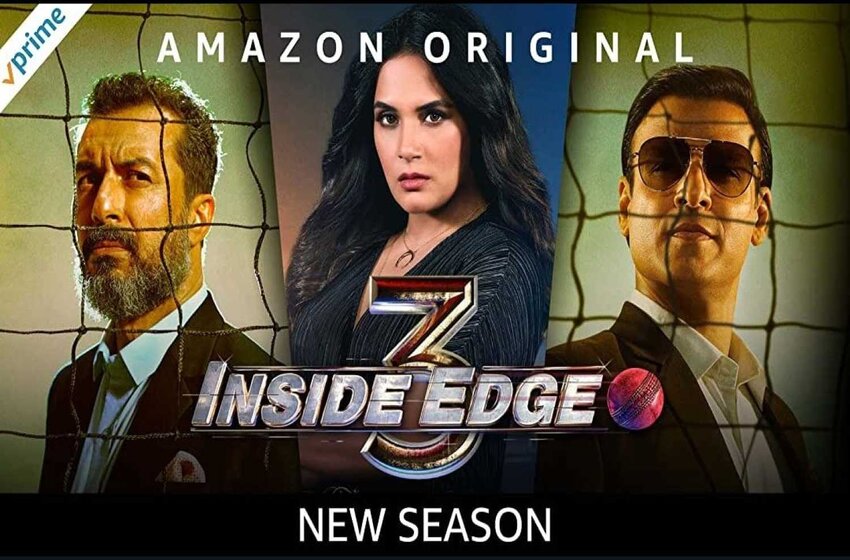 The first season of Inside Edge dropped on Amazon Prime Video in 2017 and it captured the viewers with its sensational drive. Cricket lovers were offered a no-holds-barred look at the nasty, underbelly at what is mainly thought of as the “gentleman’s game”. So after the huge success of two seasons of Inside Edge, it has come up with its third season. In this article, we are going to discuss the Inside Edge 3 review.

In the series, drugs sex, politics, match fixing, everything was a fair game. But with time, the Farhan Akhtar-Ritesh Sidhwani production has changed to a family drama where you do not get to see world class cricket till the sixth episode. Watch the Inside Edge season 3 trailer now.

The Plot Before You Know The Inside Edge 3 Review

Before we get into the Inside Edge 3 review, let us have a look at its basic storyline. After the primary team of the PPL (Power Play League), Mumbai Mavericks, is found guilty in the charge of match-fixing and the usage of drugs. For these reasons the team is banned for two years from the league, and an inquiry is set up to unravel the source of the rot. Will this prove to be a game-changer taking into account the powerful people like Yashvardhan Patil aka Bhaisahaab (Aamir Bashir), president of the ICB (Indian Cricket Board), and the founder of the PPL, Vikrant Dhawan (Vivek Oberoi), and all others are involved?

Inside Edge 3 Review: How The Portrayal Went?

The Inside Edge 3 boosts up the drama, with greater stakes and rivalry among the two extremely powerful people Vikrant Dhawan and Bhaisahaab, and their thirst for power. The season begins from where it ended with the Mumbai Mavericks being banned from taking part in the PPL after its owners were found to be involved in illegal match fixing and betting. The co-owners of the team Zarina Malik (Richa Chadha) and Mantra Patil (Sapna Pabbi), along with some other team players were charged with committing this crime, and are being investigated as a result of these acquisitions. As events unravel, it will become evident whether this power game is larger than everyone and every relationship.

Unlike the previous time, this season takes the help of time travel to chronicle the lives of all main characters as teenagers while also unraveling some dark secrets from their past. Along with keeping the curiosity high, as Vayu Raghavan (Tanuj Virwani), who desires to be the captain of the Indian Team, fights for the position against the present captain, Rohit Shanbagh (Akshay Oberoi). Also, Imaad Akbar (Sidhant Gupta), the latest off-spinner bowler, manages to irritate the interest of the spectators in seeing if he can prove his worth in the important India-Pakistan tournament. None of them, however, understands they are merely puppets in a game that will become even more offensive when someone silently attracts the strings and flips things around for their own profit.

This 10-part sports drama has been directed by Kanishk Varma and is fast-paced and engaging. The clear resemblance to real-life happenings, whether it is the emotions of people viewing the India-Pakistan match or their interest over who will take home the champions trophy, keeps the audience stuck. Also, the scenes that have cricket are well implemented and genuinely nail-biting, similar to the real match. Neeraj Udhwani and co-writer Karan Anshuman efficiently designs the plot, and it combines the game of politics, power, greed, and revenge while keeping the match-fixing as the prime premise of the narration. However, the climax takes far too long to happen, and once you get to the ultimate episode, it becomes more melodramatic, and with all the things wrapping up so quickly that you get the idea that even the writers were in a hurry to finish.

After the Inside Edge season 3 review, here is a list of the complete cast of the third season of Inside Edge.

After this Inside Edge 3 review, it can be concluded that similar to the previous seasons in this franchise, ‘Inside Edge 3’ has more to provide than the highs and lows of the cricket matches. So, if you have invested your time in viewing the earlier two seasons, you will not want to miss this one. The performances of each and every actor have been great. You can watch Inside Edge 3 at Amazon Prime Videos.

Human Review: The Best Medical Thriller To Watch This Weekend