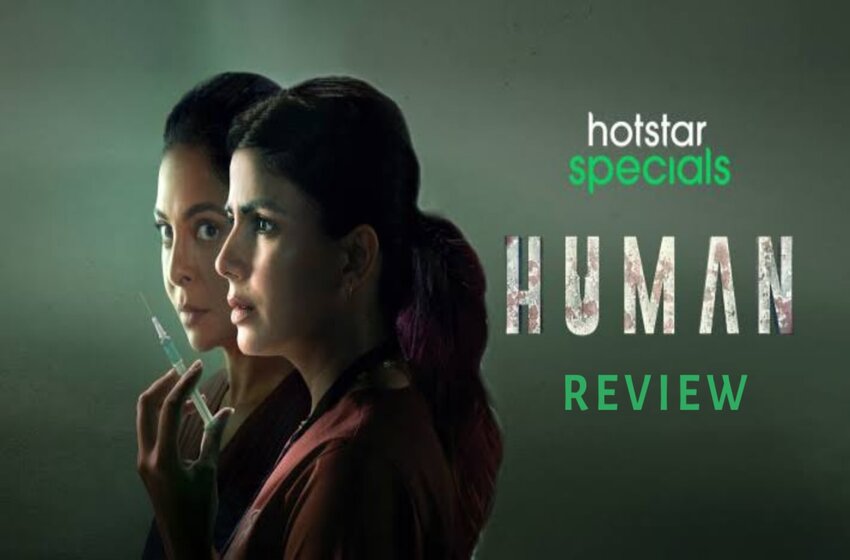 Illegal drug trial. Evil Pharma. Tragic Deaths. Human guinea pigs. And some two-legged animals who walk the thin edge of morality and ethics. On that note, the Human web series seems to have everything a medical thriller needs, especially the time when we are again amidst another variant of this pandemic. Let us have a look at the Human review.

What Is The Series About?

Before we start with the Human review, why not know the plot once. The medical science space is one that only a few people can perceive completely. Human, a show on Hotstar that explores unknown territory, gets into the shadowy underneath of a society that sees humans as guinea pigs.  Not only that, they even use them for testing new age products. What comes after that is a blundered experiment that releases a can of worms throughout the complete medical profession. The plot revolves around a pharmaceutical giant that is availing the lax clinical trial rules of India to boost the development of the latest drug, in spite of lethal side effects.

In the meantime, 35 year old Dr. Saira Sabharawal that is played by Kirti Kulhari, gets her dream job in a premier hospital in Bhopal under the membership of a popular 45 year old Dr. Gauri Nath who is played by Shefali Shah. Saira evolves under the guardianship of Gauri and the two women begin to form a close bond over their commitment to medical science. However, a shocking finding throws their life into turmoil as their plot becomes interwoven with Mangu, a young migrant worker, who is just twenty years old, and manages to bring havoc on the medical structure. Will good intentions prevail in the hearts and minds of the doctors? Or will the medical structure just become a joke and a bag of deceit for all? You will have to watch the show to find that out. But how far have they been successful to narrate the story on screen is what this Human review 2022. Here, have a look at the trailer of the Human Hotstar.

Human Review: Why Dedicate Your Time To This?

‘Human’ is surely a brave attempt. There is no doubt about that. Portraying the ills of a profession that is thought to be next to god, is just similar to trying to deter you from your religion. The writing by Ishani Banerjee, Mozez Singh, and their team is the emphasis of the show. They have very well narrated the hierarchy that prevails in society. In trying to portray a fictional story of illegal drug tests, they have actually touched upon a good number of societal evils. They have pointed them just as they would be in real life, and that is highly commendable.

In this Human web series review, we will have to talk about the marvellous acting the cast has offered. Shefali Shah is the star of the show. She comes up with another heavenly performance. It is a disgrace that we do not get to see her that frequently onscreen, but she lights up each and every frame that she is in. Whether it is a moralistic stand or a powerful speech or even an intimate shot, she wins you over with the way she prepares herself into the character. You will not see Shefali Shah as you will be unable to witness anything beyond Dr. Gauri Nath.

Now coming to Kirti Kulhari. She is good as always. She manages to draw attention from the great performance of Shah and arrives with a trump card of her own. Every shade she brings into her character takes the show levels higher.

Vishal Jethwa is the surprise inclusion, and he is going to blow the audience away with his performance. His performance is an appropriate example of what a role can do to the flow of the complete story despite having a restricted screen space.

Sirsha Ray’s cinematography is truly intriguing. The way the symmetry has been blended by showing dirty poverty on one side and illuminating affluence on the other with the same aplomb is amazing. It helps to keep the thrill alive till the very end.

In this human web series 2022 review, it is crucial that we mention the highly talented cast that has acted in the film. The Human cast includes:

In this Human review Hotstar, this can be stated with assurance that ‘Human’ tries to articulate the collateral damage because of the fast-tracked drug trials for financial profits. The story sounds absorbing, but along with the start and end, the edge-of-the-seat feature looks missing. Touching on compelling ideas like the medical malpractice, the value of human life, class divide, and branching of a fast-paced medical cause is all good, but when you are somewhat entering into the improbable zone, you may lose a lot of brownie points there. However, it is still better than anything else that has been released this weekend. ‘Human’ is indeed a good “One Time Watch”. The Human review IMDb rating is 8.7/10.

Pushpa Movie Review: What Gave This Film So Much Love?

The Matrix 4 Review: Has It Come Out To Be The Best?