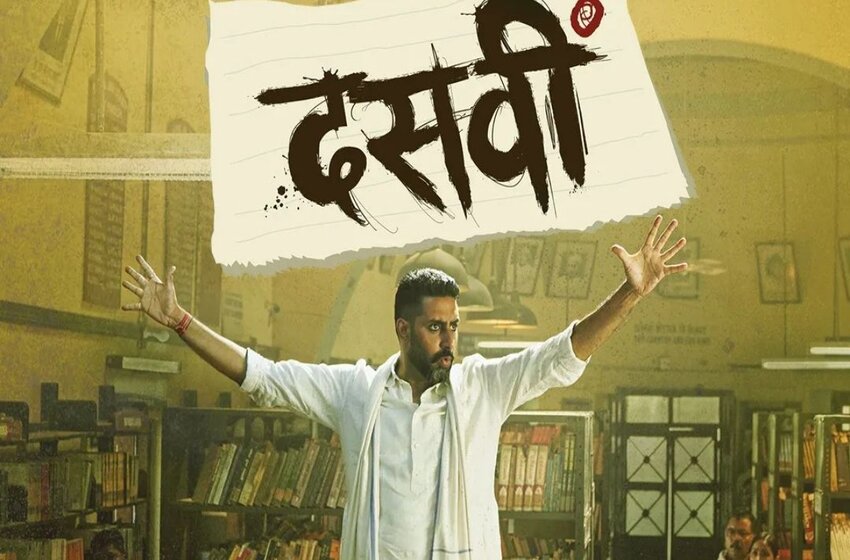 “Those who fail to learn from history are doomed to repeat it.”

This quite effectively sums up the idea of Dasvi that stars Avishek Bacchan in it. With all good intentions to entertain and educate the audience, this film somewhere falls prey to all the chaos and confusion that it creates. With that let us have a look at the Dasvi movie review.

Before getting into the Dasvi movie review, let us have a look at the storyline of Dasvi. After his name comes up in a scam, Gangaram Chaudhary played by Abhishek Bachchan, CM of the fictional state Harit Pradesh is sent to judicial custody. To skip jail hardships, the disgraced nearly 50 Haryanvi politician opts to get back to studies and sit for class 10 board exams during his sentence. He vows that he would not be a CM again unless he is “Dasvi pass”.

Dasvi Movie Review: How It Went?

Now that you have known the narrative of Dasvi, here is a Dasvi movie review. To retain the throne in the family, Gangaran ensures his wife, played by Nimral Kaur who is a demure housewife, takes over as the Chief Minister in his absence. Unwilling at the start to get herself into the world of dirty politics, she takes a sudden interest in it once she tastes fame and power. Vimla Devi no longer likes being the second and temporary CM and she starts to enjoy the ring of Gangaram being addressed as the “CM’s husband”. Unaware of his wife’s overnight ambition in politics, Gangaram is tortured even in custody by the new superintendent Jyoti Deswal, played by Yami Gautam Dhar who constantly reminds him that he is illiterate.

The fearless officer refuses to grant him special treatment. Reluctant at first, she encourages him to study in the jail as there is no larger eye opener than knowledge and education. The story is slightly inspired by the former CM of Haryana Om Prakash Chautala.

It is never too late to learn something new. No matter how challenging or embarrassing, to start somewhere no matter how delayed, is to succeed. Filmmaker Tushar Jalota aims to explore this idea through a 2 hours long movie. The intent is correct and the cast has delivered a sincere performance, however, the narration and setting go way too far and are also caricaturish to keep the audience engaged. Everyone acts like they are in a badly scripted play that depends on forced humor. It is not hard to say that the dialogues are not hitting the audience enough.

There are some lines that have been delivered cleverly like,

But the edged wit is not very near. Most of the comic punches fall flat and cannot hold their humor in it. The part where everyone is trying to play games with everyone because of their political agenda does not entertain you either.

While the movie has several heartwarming scenes, the character sketch and arcs are not well connected and that is a big cause of concern. Despite watching the characters delivering countless filmy dialogues, you feel like you know nothing about these individuals except for their love for theatrics. The script barely scrapes the surface and as an outcome, you keep wondering why a corrupt politician would have an instant change of heart. What allows his wife and also the jail superintendent to have the views they do. With no solid back story, the awakening of conscience is ineffective and abrupt. With a lack of context and a gradual construction of the plot, it all feels like a poorly scripted play with the overindulgence of the cast. With that, have a look at the Dasvi trailer.

Now that we have a Dasvi movie review, here is the list of the complete cast of the Dasvi movie.

After this Dasvi movie review, it can be concluded that, even though Dasvi has its heart with the right intentions and aims at sending out a strong message, it strongly lacks execution and offers average narration. The performance of the cast is good at their places but the complete implementation did fall short. There is no concrete Dasvi movie review IMDb till now. Dasvi release date was scheduled on 7 April and it got a Netflix and JioCinema release pan India. And you will get to watch Dasvi movie story in Hindi.

The Kashmir Files Review: More Layers Could Have Been Discovered

Jhund Movie Review: An Outstanding Sports Drama Of The Have-Nots