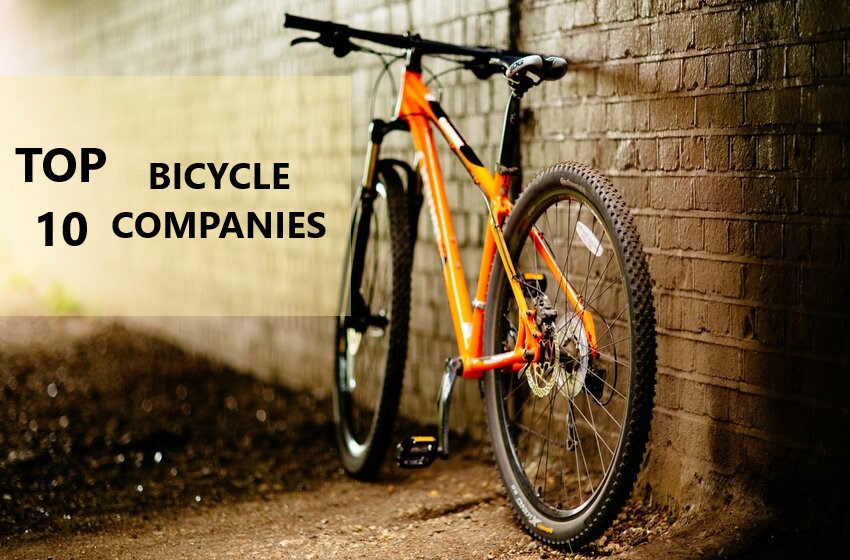 When you purchase a bike you want to ensure that you are purchasing a quality one, something that can last for several years as you are investing a good amount in them. The top bicycle brands have ties with cycling communities where many are started by former racing greats. In this article, we are going to have a look at the top 10 bicycle companies around the globe.

When selecting the top bicycle companies there are a variety of factors that should be looked at. One among them is how many models have been produced by the brand and whether they had a bike to suit a variation of cycling styles or requirements. For instance, we tried to stick to brands that offer  both mountain and road bikes. Also the price points should be looked at. Lwow end and low quality bikes brands are not included in this list. So without any further delay, let us begin with the list of top 10 bicycle companies across the globe.

Trek got its initiation in Waterloo, Wisconsin in 1976. As per a media house, it is the biggest bike brand that is based in the US. Even though most of its production has shifted overseas, the entity still produces some bikes in the United States. As of 2014, it was making nearly 25,000 bicycles domestically every year, which totaled to nearly half of all bikes that are produced in the United States

Trek produces a broad range of bike styles, at a complete range of price points. It creates bicycles for women, men, and children, along with biking apparel and gear. Along with traditional foot powered bikes, this bicycle company makes a few electric mountain bikes. The price of the bikes range from a few hundred dollars to a few thousand.

Cannondale is another best bicycle companies that dates back to the 1970s. While two friends founded Trek over a glass of beer, Cannonade was born over a pickle factory in Connecticut. Initially, the entity did not make bikes but instead created a bike trailer, apparel, and accessories.

In 1983, the company formed its first bike, which was a touring model. It followed up with a racing bike the next year. In 1997, this company made waves at the Tour de France by having members of the Saeco cycling team ride on aluminum frames. As per the company legend, the leader of the Saeco team declared Cannondale bikes to be the best.

Kona Bikes is a relatively recent company. The company was started in 1988 by Jacob Heilbron and Dan Gerhard. The pair prevails to own the brand presently and it remains to be based out of the Pacific Northwest.

The claim of Kona to fame is being the primary company to produce a straight leg mountain bike production fork. The brand operated with Brodie to develop the bike style. Presently, Kona has 10 variants of the fork, made for mountain bikes and asphalt bikes of varied sizes. So if you are looking for the best mountain bike brands this is among them.

Colnago is among the best bicycle companies that are based in Italy. The brand dates back to 1952 when Ernesto Colnago established it in Cambiago. Ernesto Colnago was primarily expected to take over his farming business of the family but pursued a career in cycling from a young age. At 13, he was an apprentice at a bike entity and eventually opened his shop.

This is another Italian bicycle brand that has the varied honor of being the oldest continuously functioning bicycle brand across the globe. It dates back to 1885 when Eldoardo Bianchi took it upon himself to follow a chain to the famous “ordinary” bicycles and to decrease the size of the front wheel.

You could say his concept was a success. Over the years, Bianchi was awarded with several other developments in this function and design of the bicycle. For instance, he designed the first ever front brake in 1913.

Raleigh Bikes is a British cycling company that began in 1887 making it one of the best bicycle companies out there. At the time, the brand offered nearly three bicycles every week. As early as 1896, production had risen to 30,000 cycles every year.

Across the 20th century, the demands for the bicycles rose and the brands prevailed to increase producing more and more cycles every year and expanding the size of its plants and factories. It even dabbled in motorcycles for a while. In the United States in specific, demand was high for the brand’s 10-speed cycles.

This is another best bicycle companies across the globe. It began in 1995 in Canada. The aim of the bike company is simple, that is it aims to design the fastest bicycle across the globe. To that end, it is probably not a brand that you are going to check out if you are a novice to cycling or if you are searching for a bike for commuting or occasional purpose.

But if you regularly have the requirement for speed on your cycle, whether you are training for the Tour de France or an Ironman or just enjoy a weekend ride, this might be the ideal brand for you. Cervelo has 5 series  of road bikes – the C series, Series, Series, S series and T series. So this is among the best road bike brands.

Orbea is a Spanish bicycle entity that started life in 1840 as a rifle company. It did not began to make cycles until the 1930s. It employed thousands of Spanish citizens at the era of Civil War and was ultimately bought by its employees and turned into a cooperative in the early 1960s.

As you might assume from the name, BMC Switzerland has its headquarters in Switzerland. The entity began in 1994 and presently has nearly 120 employees across the globe. BMC supplied bicycles to the Phonak Cycling Team, which is a Swiss team that was overseen by Andy Rihs. Rihs finally took over the complete company in 2000. So this is among the best bicycle brands.

This is the last name in our list of top 10 bicycle brands. The founder of this company, Ike Tseng, got the notion for the entity on a visit to the United States in the early 1970s. Tsung went to a bicycle shop and found a note there stating that the repair shop would not work on any bikes that are produced in Taiwan, due to the low quality of those cycles.

Tseng set about to design a bike brand that had high-quality bikes that were made in Taiwan. Merida, which was officially established in 1988, does just that. The entity combines Taiwanese manufacturing with an R&D arm that are based in Germany. Presently, it produces a range of bikes that include city or commuter cycles, mountain cycles, and road bikes.

The one thing that never gets out of trend are bicycles. Even today they are highly used and preferred across the globe. So in this context, we have stated the top 10 bicycle companies across the globe that are still operating full fledged and cater to all the good criterias required to be in this top position.

Life Insurance Companies: These Options Will Make Your Decision Easy

Best Book Publishing Companies In The World Of All Time